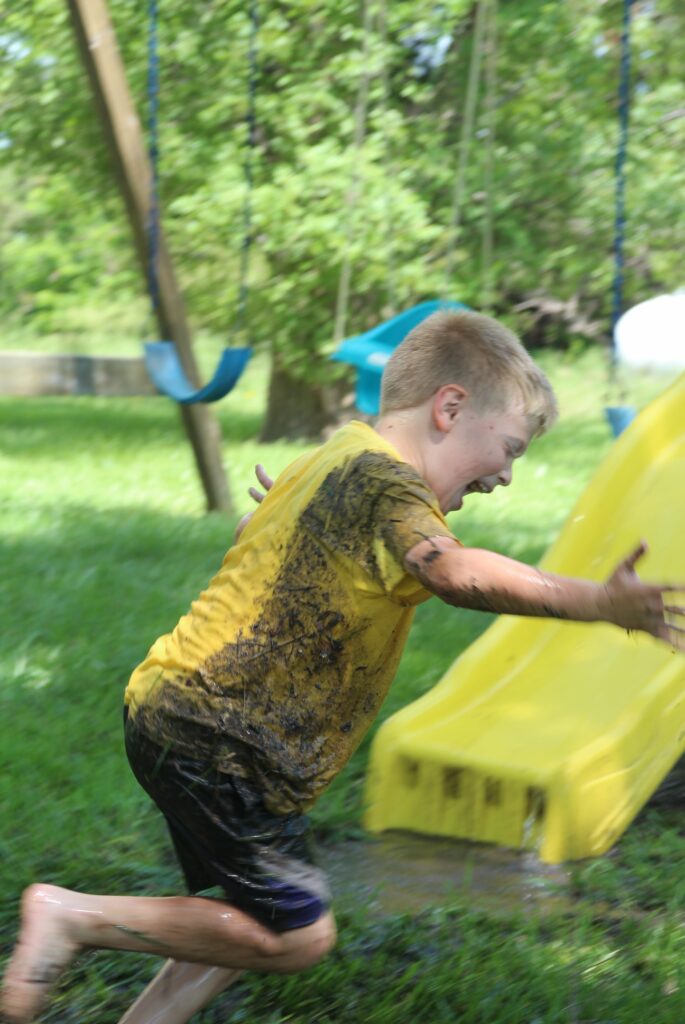 Because we see things so often, we see them less and less.

Those who live in thanksgiving daily, however, have a way of opening their eyes and seeing the wonders and beauties of this world as though seeing them for the first time.

Today is about dirt. I had to learn about it, again, from my 2-year-old last week.

She and I were playing outside — something we have more time to do right now. She started to roll around in the grass, and asked me to play in the grass, too. As I got close to the ground, I inhaled the wonderfully sweet and earthy scent of spring soil. I hadn’t smelled that in a long time. What an unexpected gift.

This photo is of a child, having a fantastic time with dirt and water. The more bits of Kansas he had on him, the more shrieks of laughter I heard.

It think most adults keep forgetting the joys of simple things like dirt. I am lucky to have children around to remind me. This week, I also had the opportunity to teach my 2-year-old the joys of making big splashes in mud puddles, so maybe I can also remind them on occasion.

See the world as if for the first time; see it through the eyes of a child, and you will suddenly find that you are free.

(I originally wrote this on March 31, and am sharing it on my blog for the first time today.) 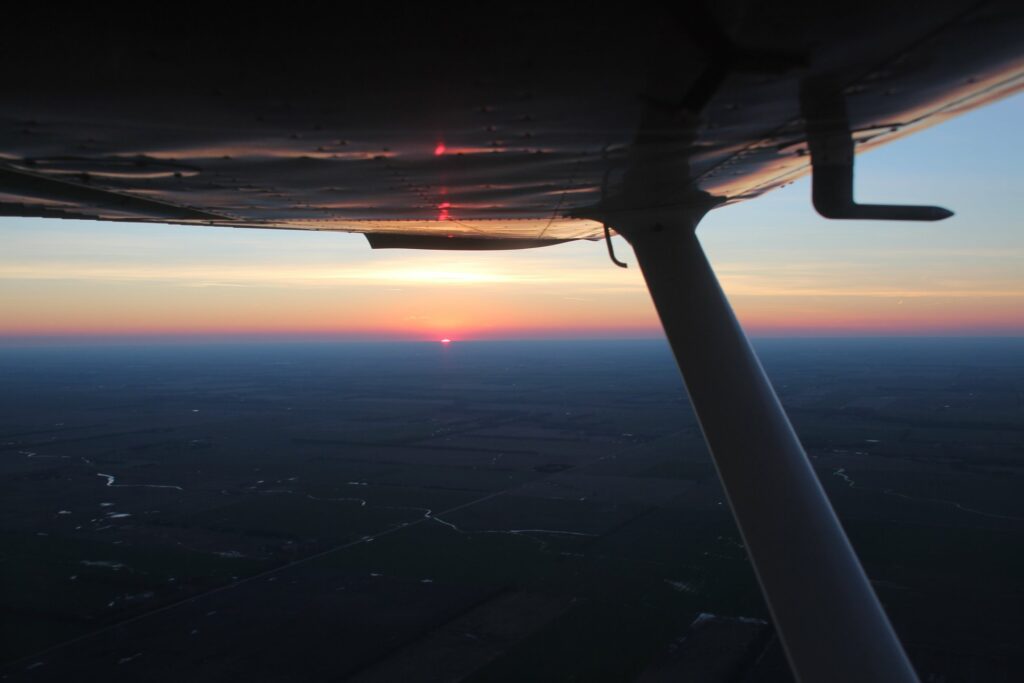 This is sunrise over Kansas. Or maybe sunset. I’m not going to tell you this time, because it doesn’t matter all that much. I love that it (if you don’t over-analyze it) could be either, and also that it looks like the land in the distance fades to a blue ocean.

Is it sunrise or sunset? What is at the horizon? I don’t think it really matters, in the presence of such natural beauty. 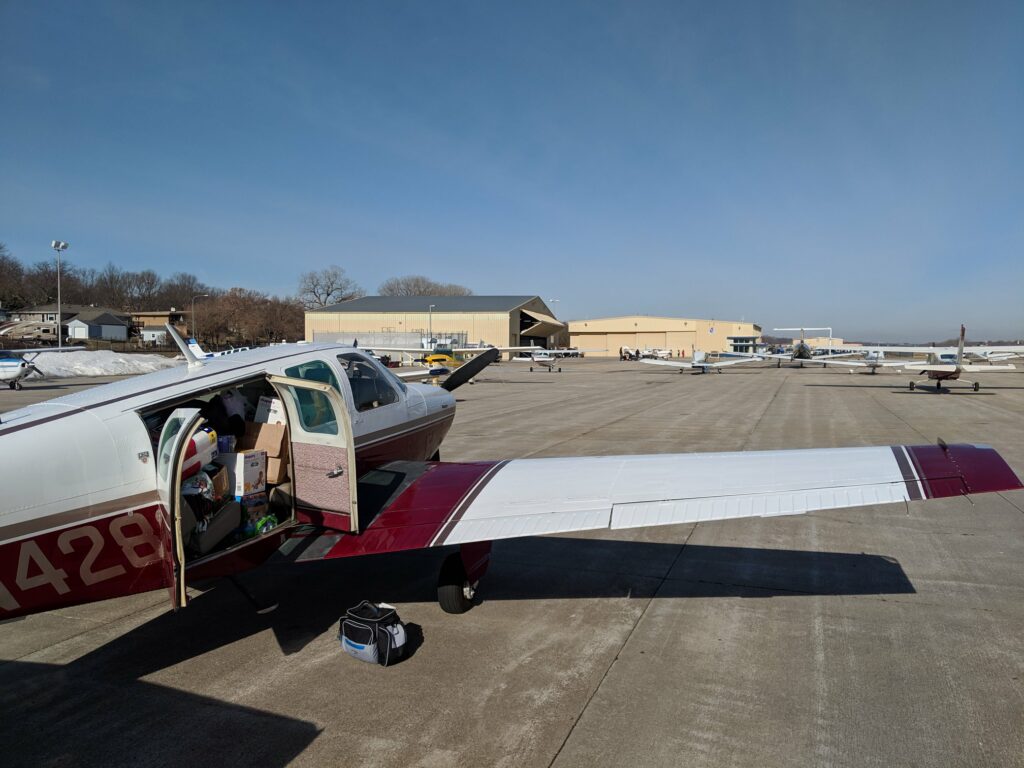 When I was a boy and I would see scary things in the news, my mother would say to me, “Look for the helpers. You will always find people who are helping.” To this day, especially in times of “disaster,” I remember my mother’s words and I am always comforted by realizing that there are still so many helpers – so many caring people in this world.

This photo doesn’t have amazing lighting or fantastic composition. In fact, it looks ordinary. It’s only when you know its story that the beauty shines through.

In 2019, Fremont, NE had been cut off by flooding. People were trying to get in and out of the town, and couldn’t. The only way in or out was from the small airport. About 50 pilots from Nebraska and Iowa (and me from Kansas) came over to help. Every plane you see here — and more that I couldn’t fit in the frame — was at Millard Airport, Omaha, flying people and supplies into and out of Fremont. Estimates are that we flew over 1000 people and tons of supplies that weekend. All safely.

I remember flying the family with a 1-week-old baby that had gone to Omaha for a doctor appointment and then couldn’t get home for three days. I remember the elderly couple and their dog that I flew out of Fremont, the former Marine riding in the co-pilot seat next to me, cracking jokes with me as we went. I remember the group of ladies that were laughing as I gave them the required seat belt briefing, the mom with her kids, the man that had to get to work, and packed a few day’s supplies in his backpack, unsure when he’d be able to get back home. It was the first some had ever been in a plane.

There were so many helpers. People all over Omaha brought supplies to Millard airport. Others had just shown up at both airports to help organize and make lists of passengers and match them up with different size planes. Someone at Millard had a trailer and golf cart for supplies. When I’d land at Fremont, before I was even out of the plane, highschoolers had already swarmed it and were helping to unload supplies or help passengers out. One time when I got back to Millard, I found lunch: a pizza place had donated pizza for the pilots, and then a restaurant in Fremont did too. With so many extra planes in the sky, Omaha ATC was slammed and still did a fantastic job.

I of course took no photos of the people I carried, but I have thought of them often in the last year.

This photo is of Millard airport, Omaha, loading up supplies. Look at all these helpers. I think it’s one of the most beautiful sights I’ve ever seen.

Today there are billions of helpers in this world. The obvious ones: the truck drivers, the health care workers, the grocery store workers. And also the non-obvious ones: all the people that are wearing masks, practicing social distancing, forgoing Christmas gatherings, for the good of others, despite the hardship and heartbreak it may cause.

When you know their story, the beauty shines through.

May we all be able to see the beauty that still surrounds us this Christmas. 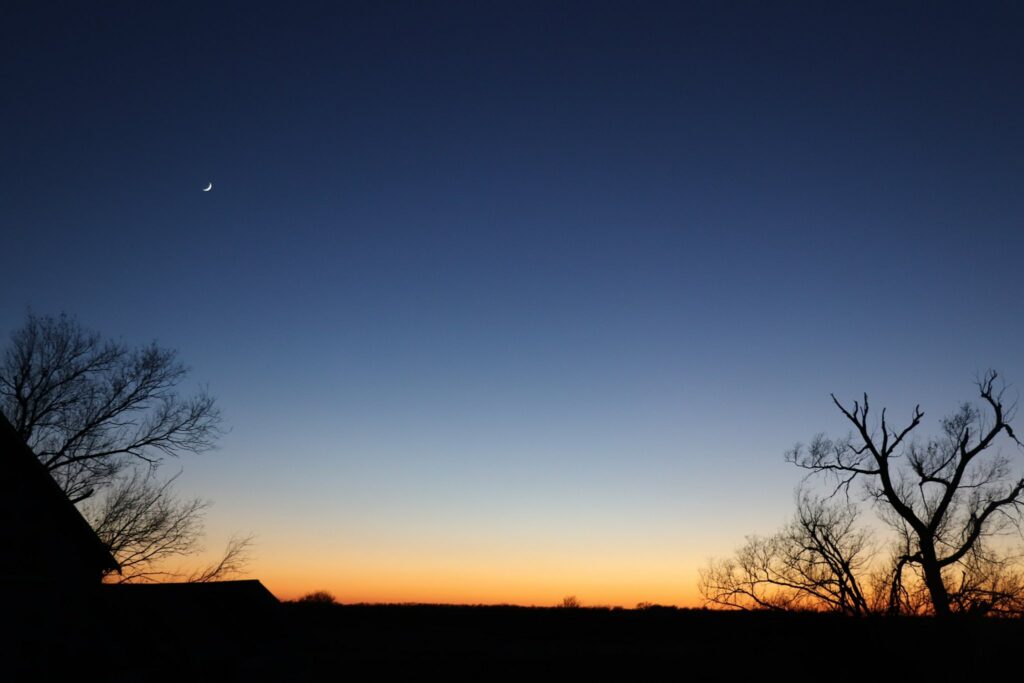 “Joyful is the dark
coolness of the tomb,
waiting for the wonder
of the morning.

Never was that midnight
touched by dread and gloom;
darkness was the cradle
of the dawning.”

Most of us are not personally experiencing symptoms of a pandemic virus, but with all the changes around us, with all the worries within us, many of us have been touched by dread and gloom.

I can find many layers of meaning in this poem. Today I think this poem excerpt reminds us to find the joy where we are, in the moment we are. Are we just waiting for the morning? Or do we take advantage of this pause to gaze up at the beautiful colors of the night? Are we defined by this moment, or do we define it? We are OK right now, so let this time be the cradle of something beautiful.

If you haven’t noticed the moon in this photo, zoom in. I don’t see dread and gloom in this photo. I see color, and hope, and beauty. 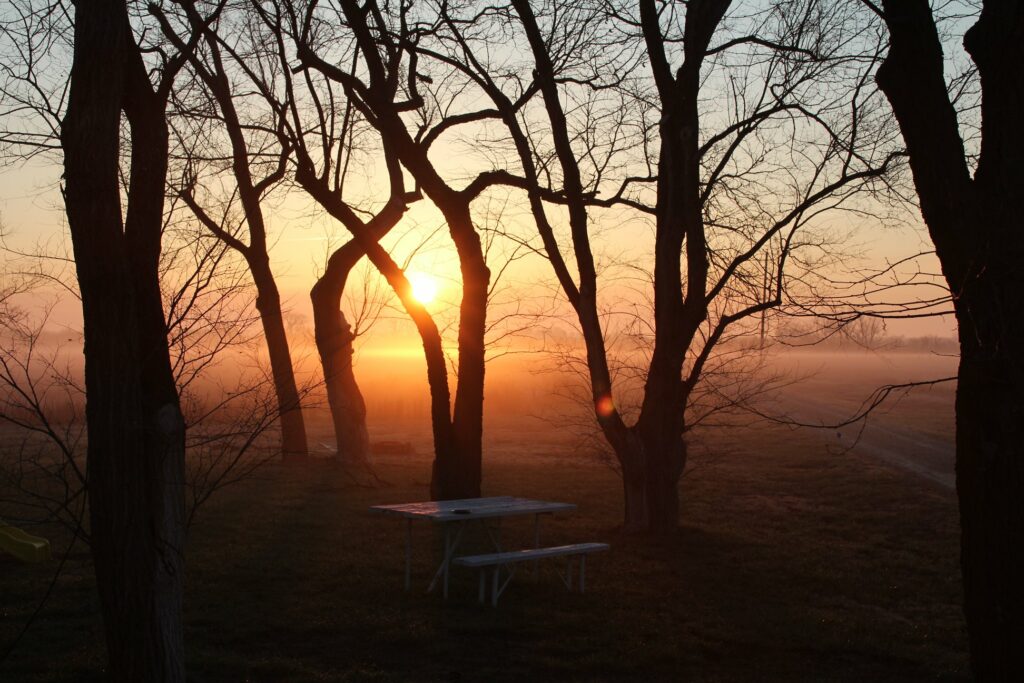 “O, Sunlight! The most precious gold to be found on Earth.”

There is much beauty in this world, much hope, much life. All we need to do is pause, breathe, and take a moment to see it. It might be as simple as the gift of sunlight. I hope you all have moments of sunlight and delight each day. 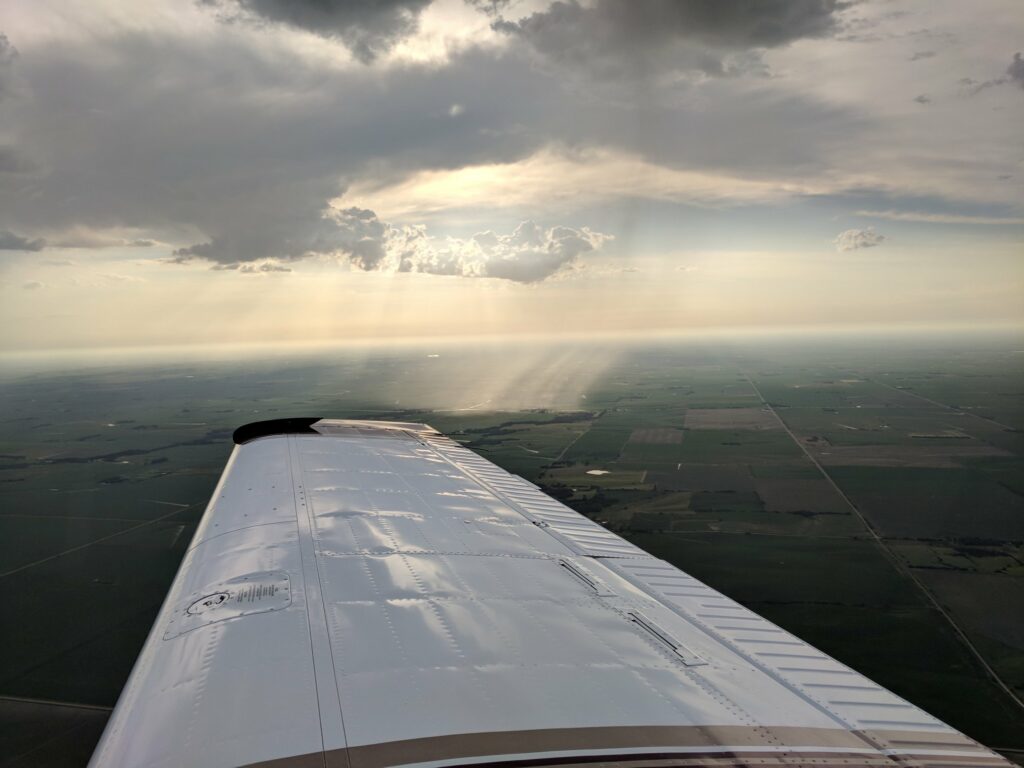 “Every storm runs out of rain.”

There are a lot of rain clouds in life these days. May we all remember that days like this one are behind us — and also ahead of us.

Every storm runs out of rain.

That was the start of a series of photos from my collection & quotes I shared with friends during the initial lockdown in spring. I’ll be sharing some here.

And here we all are, still dealing with this — and it’s more severe in a lot of ways. One of my colleagues won’t be able to see his parents this Christmas for the first time in over 40 years.

But this storm will run out rain.

And look how the scene changed, in just a few minutes. This is coming! 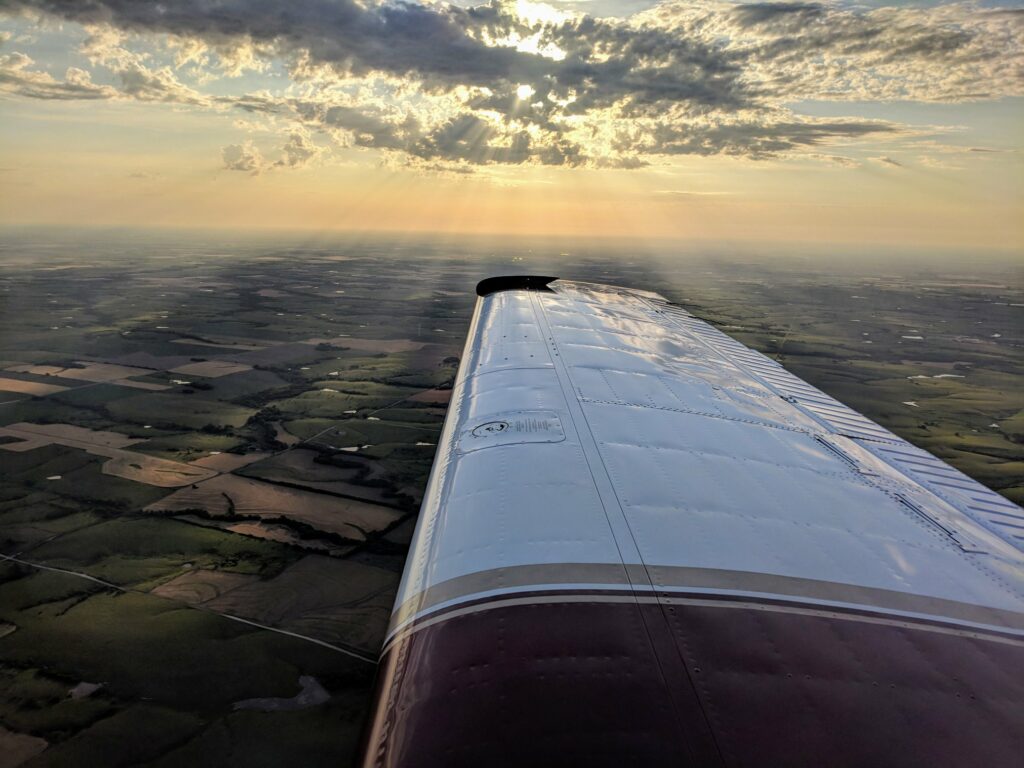