This is the biggest highlight of our trip to Greece for me. I enjoy having the chance to meet people, visit for awhile, and make new friends — and that certainly happened in Greece.

In one of the shops we happened to step into, I noticed a radio behind the counter. That’s not unusual itself; radios often catch my eye these days. But this radio was tuned to 21.070, an amateur radio frequency. So I asked the shop owner if he happened to be a ham. And indeed he was. He was Lakis (SV5KKU), and Terah and I had a great time visiting with him. Terah took some photos of us, and then we made our purchases and headed out.

I had brought my HT (handheld radio, weighs a few ounces and is powered by batteries) with me, and Lakis told me about the repeaters in the area. I had known about some of that since I had emailed Panos of the amatuer radio club in Rhodes before leaving home (I found his name via Google).

A couple of days later, on Tuesday, we found ourselves back in Lindos. It was mid-afternoon, so the shops were quiet. After a late lunch, I thought it would be nice to drop in on Lakis one more time, since we were scheduled to fly back the following morning. I’m not sure how long we stayed — it must have been at least an hour — and enjoyed the fresh orange juice he prepared.

After we got back to our hotel Tuesday, I learned that our flights on Wednesday were canceled due to a nationwide air traffic controller strike in Greece. After 3 hours on the phone with Delta (more on that experience later), we got rescheduled to fly back Friday.

On Wednesday morning, I remembered that the Rhodes amateur radio club meets every Wednesday evening, and now I would be able to go! I knew how to contact Lakis by email and on the radio, and he kindly offered to pick me up and take me there.

So that evening, I got a tour of his impressive mountaintop installation, and then it was on to the club – the Radio Amateur Association of the Dodecanese (SZ5RDS). There I met Panos, whom I had emailed earlier (and I think surprised him a bit). It was a friendly group, and they translated into English for me every so often so I knew what was being discussed.

When I was about to leave, they gave me this: 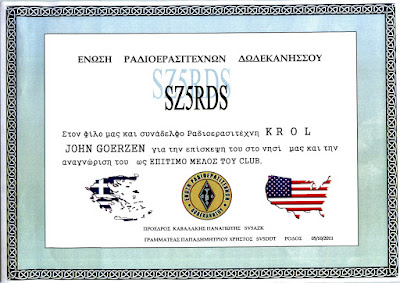 The translation, partly from my memory and partly with the help of Google Translate, is:

Our friend and radio colleague KR0L JOHN GOERZEN, who visited the island, has our recognition as an HONORARY CLUB MEMBER.

(I hope that any Greeks reading this will send me corrections.)

I truly appreciated that gesture – and meeting all the people in the club.

On the way back to the hotel, Lakis and I stopped by a restaurant, which I believe had the best souvlaki I’ve ever tasted — thanks! We brought some back for Terah. She had chosen to stay at the hotel that evening and had a small hotel meal earlier, but enjoyed the souvlaki and pita. Terah had explained to the maître d’ that I wasn’t along that evening because I had gone to an amateur radio club meeting. Judging by the surprised reaction, this was probably the first time they had heard that particular comment!

Experiences like this make travel fun and worthwhile. Thank you very much, Lakis and everyone in the club — I hope to have a chance to visit again.