It’s been busy lately, and I haven’t had the time to blog. With the change in job, various travel, and settling into a new routine, I’ve not done as much writing of late. But life marches on, and before memories grow too fleeting, I think I should share a few.

We recently changed the arrangements for the boys. Instead of them each having their own room in which they sleep and sometimes play, we purchased a bunk bed. Oliver graduated from his crib to the lower bunk, and Jacob has the higher bunk. This has, predictably, created a few opportunities for behavior issues. Overall, it’s going well, and they appreciate their new, more open, “play room.”

Both boys sleep with their stuffed animals. Jacob calls his “my friends”. He still likes his butterfly, which he has had since he was an infant. He sometimes talks about how much he loves his friends, and how they like to get hugs, and how they are happy.

Jacob continues to enjoy reading. He has a toy low-res camera and he even recorded a video of himself reading Brown Bear, Brown Bear.

Oliver’s vocabulary is coming alive and is fun to watch. Jacob has taken to trying to teach Oliver how to say things. One day, Jacob saw a number like 451 on the side of a train, producing a conversation like this: “Oliver, can you say four hundred and fifty-one?” “Four dred iffy on!” “You got it!!!” “YAY!”

Today as I was walking past Oliver’s train track on the floor, he grabbed me by the hand, had me sit down, and kept holding on to make sure I’d stay right where he wanted me as he pointed and talked all about his trains. Aww.

One cold and windy Saturday morning, the boys were getting restless. What to do, we thought? I decided to bring out one of the manual typewriters from my collection. Oliver loved watching it do things as he pressed buttons. Jacob enjoyed spelling “mom”. New problem: boys fighting over how long each one’s turn at the typewriter is. This has gone on for a month now. 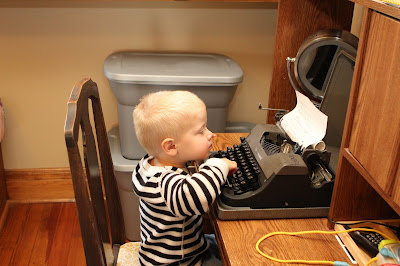 A few weeks ago, Jacob informed us that he built an antenna out of blocks. He was REALLY proud of it, and even, incredibly, insisted I take his picture with it!

I’m pleased to have a 5-year-old that calls this structure an antenna instead of a skyscraper or tower or some such thing ;-) 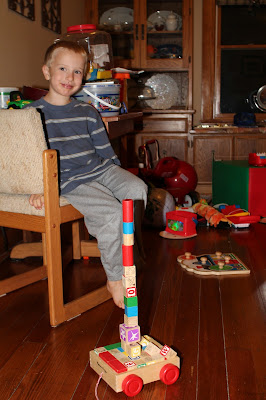 We took a train trip to Portland, OR, recently. That’s about 2.5 days on the train each way. It went pretty well — we had quite a bit of excitement though it got a little long for the boys at times. One evening, Jacob excitedly noted that the sky was “almost really dark blue, just like my song!” Wow. That was a song he made up in New York in summer 2010.

Jacob enjoyed collecting leaves as we walked around in Portland. He would then stash his pile of leaves outside the door of whatever building we’d enter, then hope to find them still there when we got back out. It usually worked out OK for him.

1 thought on “Snapshots of Life”