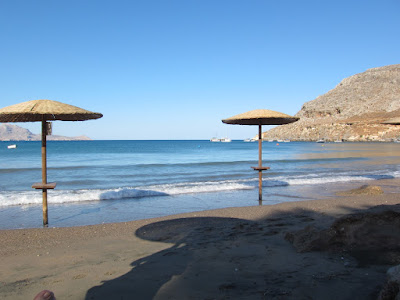 That’s a photo of Vlicha Beach, near our hotel. But before I talk about the Greek beaches, I need to explain something about living in Kansas.

Kansas is in the middle of the United States. The nearest ocean is the Gulf of Mexico, which is 700 miles (1100km) away. That’s roughly the same as the distance between Berlin and Minsk, or New York and Chicago. And I believe it’s farther away from a saltwater body than all (or almost all) of Europe. So we’re not just going to the beach every weekend or something.

Vlicha Beach was all those incredible things you ever hear about beaches. The water was so clear that I could easily see my feat while wading in it. That, and the fish swimming around them. It was peaceful, relaxing, and picturesque. Between the deep blue of the sea and the same in the sky, I suppose it is no wonder that blue is often associated with Greece. 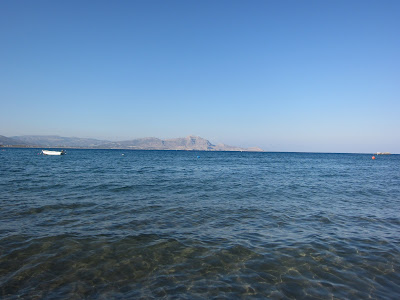 We weren’t exactly the only ones there. 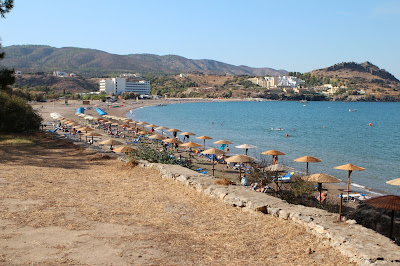 Though I think we were the only ones there with Kindles, which seemed to be much more popular in the USA than in Europe. We got several interested people carrying paper books asking what they were.

Towards dusk, the mist would become more pronounced and the mountains off in the distance started to fade: 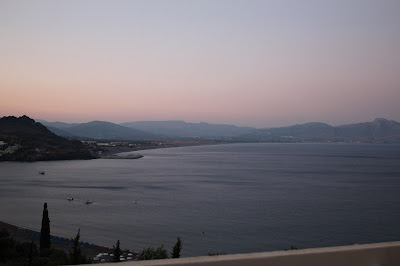 The evening before we were set to fly home, we spent some time sitting on our balcony watching dusk set in. One last gaze out over the beautiful Aegean, the misty mountains, and the boats in the distance. 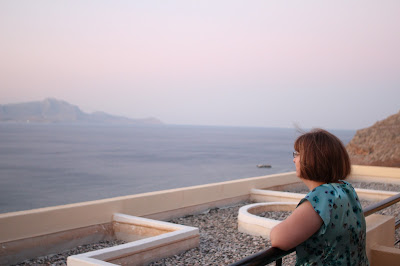