Let me set a scene for you. Two children, ages 7 and 10, are jostling for position. There’s a little pushing and shoving to get the best view.

This is pretty typical for siblings this age. But what, you may wonder, are they trying to see? A TV? Video game?

No. Jacob and Oliver were in a library, trying to see a 98-year-old map of the property owners in Township 23, range 1 East, Harvey County, Kansas. And they were super excited about it, somewhat to the astonishment of the research librarian, who I am sure is more used to children jostling for position over the DVDs in the youth section than poring over maps in the non-circulating historical archives!

All this started with giant concrete arrows in the middle of nowhere.

Nearly a century ago, the US government installed a series of arrows on the ground in Kansas. These were part of a primitive air navigation system that led to the first transcontinental airmail service.

Every so often, people stumble upon these abandoned arrows and there is a big discussion online. Even Snopes has had to verify their authenticity (verdict: true). Entire websites exist to tracking and locating the remnants of these arrows. And as one of the early air mail routes went through Kansas, every so often people find these arrows around here.

I got the idea that it would be fun to replicate a journey along the old routes. Maybe I’d spot a few old arrows and such. So I started collecting old maps: a Contract Airmail Route #34 (CAM 34) map from 1927, aviation sectionals from 1933 and 1946, etc.

I noticed an odd thing on these maps: the Newton, KS airport was on the other side of the city from its present location, sometimes even several miles outside the city. What was going on? 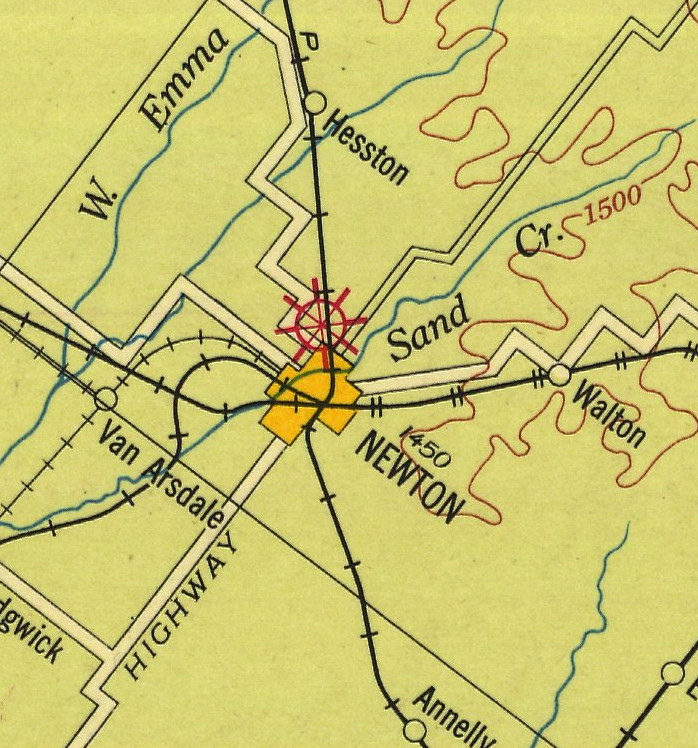 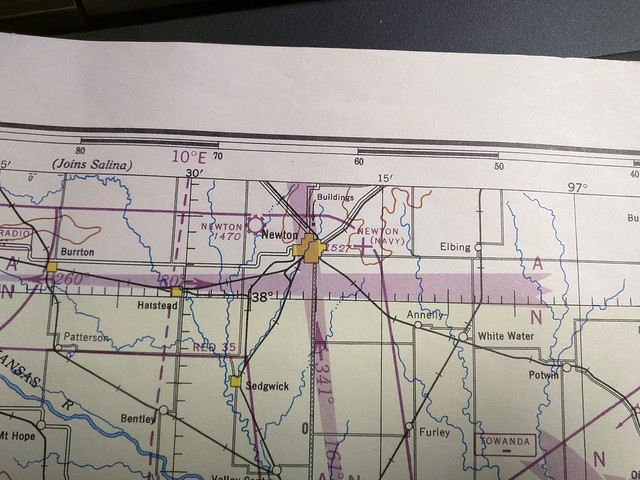 So one foggy morning, I explained my puzzlement to the boys. I highlighted all the mysteries: were these maps correct? Were there really two Newton airports at one time? How many airports were there, and where were they? Why did they move? What was the story behind them?

And I offered them the chance to be history detectives with me. And oh my goodness, were they ever excited! We had some information from a very helpful person at the Harvey County Historical Museum (thanks Kris!) So we suspected one airport at least was established in 1927. We also had a description of its location, though given in terms of township maps.

So the boys and I made the short drive over to the museum. We reviewed their property maps, though they were all a little older than the time period we needed. We looked through books and at pictures. Oliver pored over a railroad map of Newton from a century ago, fascinated. Jacob was excited to discover on one map that there used to be a train track down the middle of Main Street! I was interested that the present Newton Airport was once known as Wirt Field, rather to my surprise. I somehow suspect most 2nd and 4th graders spend a lot less excited time on their research floor!

Then on to the Newton Public Library to see if they’d have anything more — and that’s when the map that produced all the excitement came out.

It, by itself, didn’t answer the question, but by piecing together a number of pieces of information — newspaper stories, information from the museum, and the maps — we were able to come up with a pretty good explanation, much to their excitement.

Apparently, a man named Tangeman owned a golf course (the “golf links” according to the paper), and around 1927 the city of Newton purchased it, because of all the planes that were landing there. They turned it into a real airport. Later, they bought land east of the city and moved the airport there. However, during World War II, the Navy took over that location, so they built a third airport a few miles west of the city — but moved back to the current east location after the Navy returned that field to them.

Of course, a project like this just opens up all sorts of extra questions: why isn’t it called Wirt Field anymore? What’s the story of Frank Wirt? What led the Navy to take over Newton’s airport? Why did planes start landing on the golf course? Where precisely was the west airport located? How long was it there? (I found an aerial photo from 1956 that looks like it may have a plane in that general area, but it seems later than I’d have expected)

So now I have the boys interested in going to the courthouse with me to research the property records out there. Jacob is continually astounded that we are discovering things that aren’t in Wikipedia, and also excited that he could be the one to add them. To be continued, apparently!