For four years now, we’ve had a tradition: I go up to the attic one night, make a lot of noise, and pretend to be Santa. The boys don’t think Santa is real, but they get a huge kick out of this anyway.

The other day, this wound up with me singing a duet with my 7-year-old Oliver, and seeing a hugely delighted 10-year-old Jacob.

All last week, the boys had been lobbying for me to “be Santa”. They aren’t going to be able to be here on Christmas day this year, so I thought – why not let them have some fun. I chose one present to give them early too.

So, Saturday night, I said they could get ready for Santa. They found some cookies somewhere, got out some milk. And Oliver wrote this wonderful note to “Santa”: 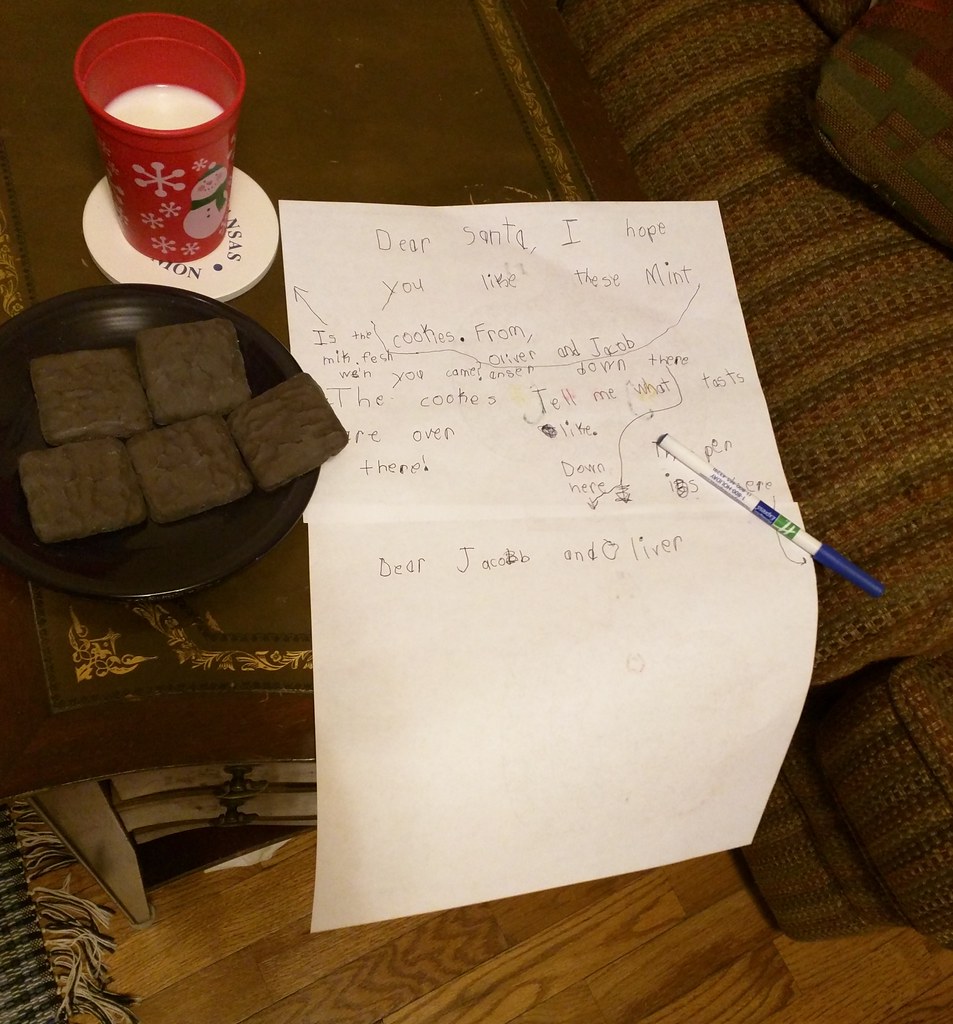 That is a note I’m going to keep for a long time. He helpfully drew arrows pointing to the milk, cookies, and even the pen. He even started Santa’s reply at the bottom!

So, Saturday night, I snuck up to the attic, pretended to be Santa, and ate some cookies, drank some milk, and wrote Oliver a note. And I left a present.

Jacob has been really getting into music lately, and Laura suggested I find something for the boys. I went looking for something that could record also, and came up with what has got to be a kid’s dream: a karaoke machine.

The particular one I found came with two microphones, a CD player, audio recording onto SD card (though it’s a little dodgy), and a screen for showing words on any music that’s karaoke-enhanced.

Cue gasps of awe and excitement from the boys when we came down in our PJs and sweats at 6:45 Sunday morning to check it out. 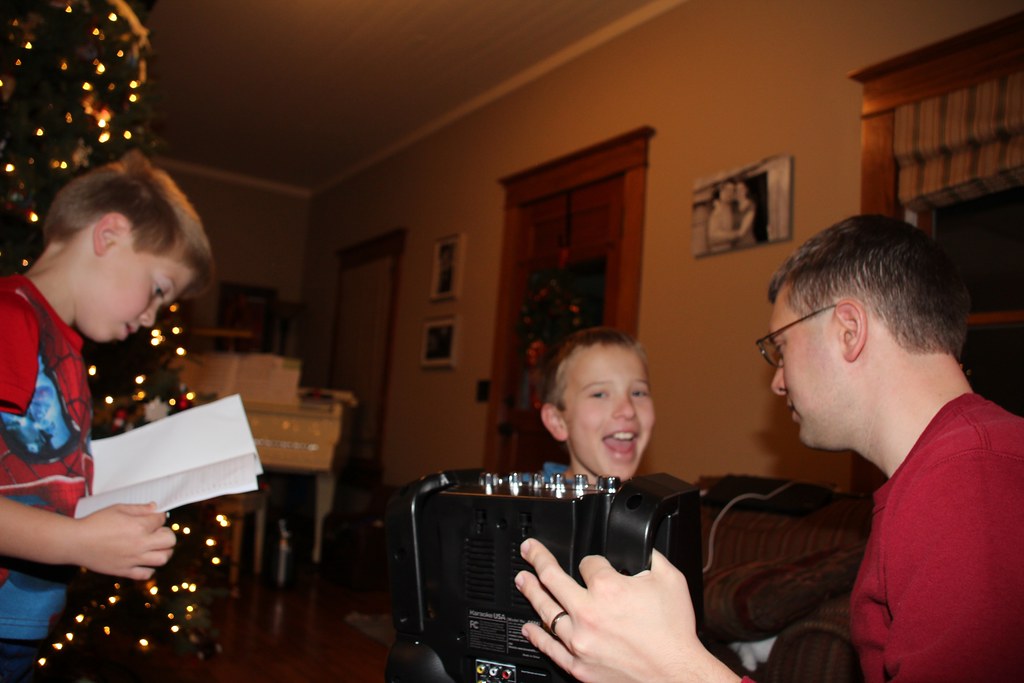 Jacob excitedly began exploring all the knobs and options on it (they were particularly fond of the echo feature), while Oliver wanted to sing. So we found one of his favorite Christmas songs, and here he is singing it with me. 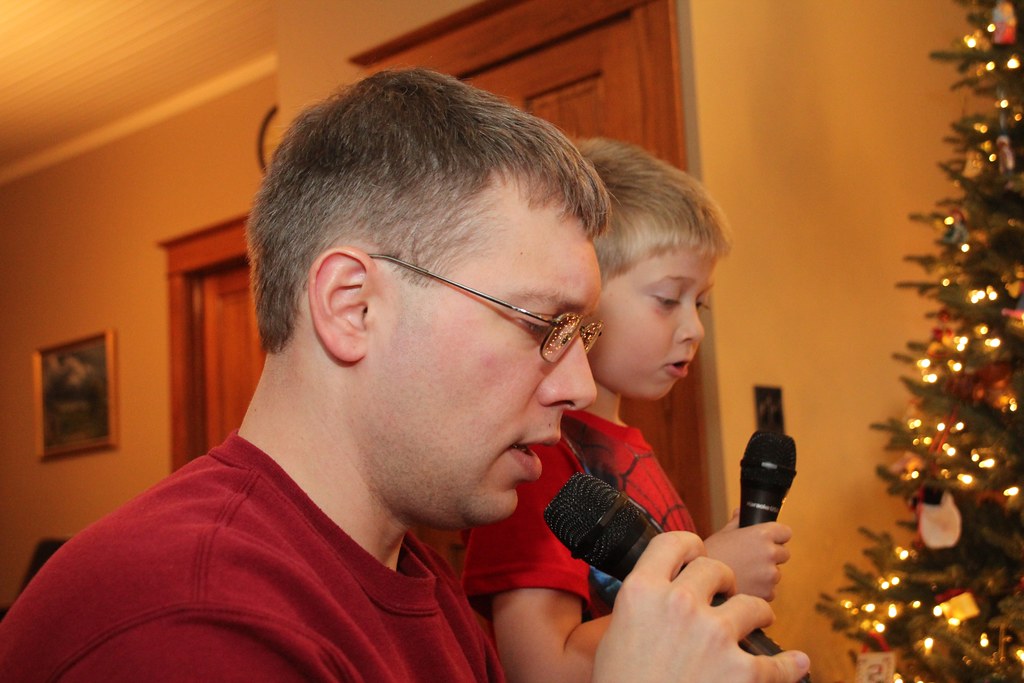 When you have a system with a line in, line out, and several microphone jacks, you can get creative. With a few bits of adapters from my attic, the headset I use for amateur radio worked with it perfectly. Add on a little mic extension cord, and pretty soon Oliver was pretending to be an announcer for a football game! 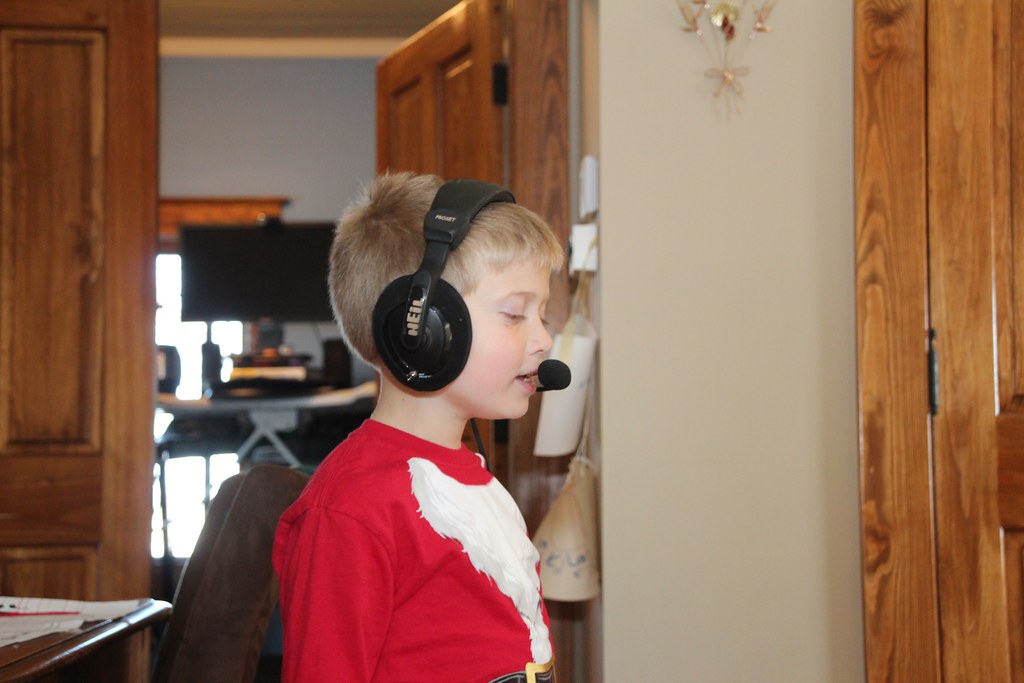 Then, Oliver decided he would act out a football game while Jacob and I were the announcers.

Something tells me there will be much fun had with this over the next while!