“Oh! I have slipped the surly bonds of Earth
And danced the skies on laughter-silvered wings;
Sunward I’ve climbed, and joined the tumbling mirth
of sun-split clouds, — and done a hundred things”

I clicked on the radio transmitter in my plane.

O’Neill Traffic, Bonanza xx departing to the south. And Trimotor, thanks for flight #1. We really enjoyed it.

And we had. Off to my left, a 1929 Ford Trimotor airliner was heading off into the distance, looking as if it were just hanging in the air, glinting in the morning sun, 1000 feet above the ground. Earlier that morning, my boys and I had been passengers in that very plane. But now we had taken off right after them, as they were taking another load of passengers up for a flight and we were flying back home. To my right was my 8-year-old, and my 11-year-old was in back, both watching out the windows. The radio clicked on, and the three of us heard the other pilot’s response:

A few seconds later, they were gone out of sight.

The experience of flying in an 89-year-old airliner is quite something. As with the time we rode on the Durango & Silverton railroad, it felt like stepping back into a time machine — into the early heyday of aviation.

Jacob and Oliver had been excited about this day a long time. We had tried to get a ride when it was on tour in Oklahoma, much closer, but one of them got sick on the drive that day and it didn’t work out. So Saturday morning, we took the 1.5-hour-flight up to northern Nebraska. We’d heard they’d have a pancake breakfast fundraiser, and the boys were even more excited. They asked to set the alarm early, so we’d have no risk of missing out on airport pancakes.

Jacob took this photo of the sunrise at the airport while I was doing my preflight checks: 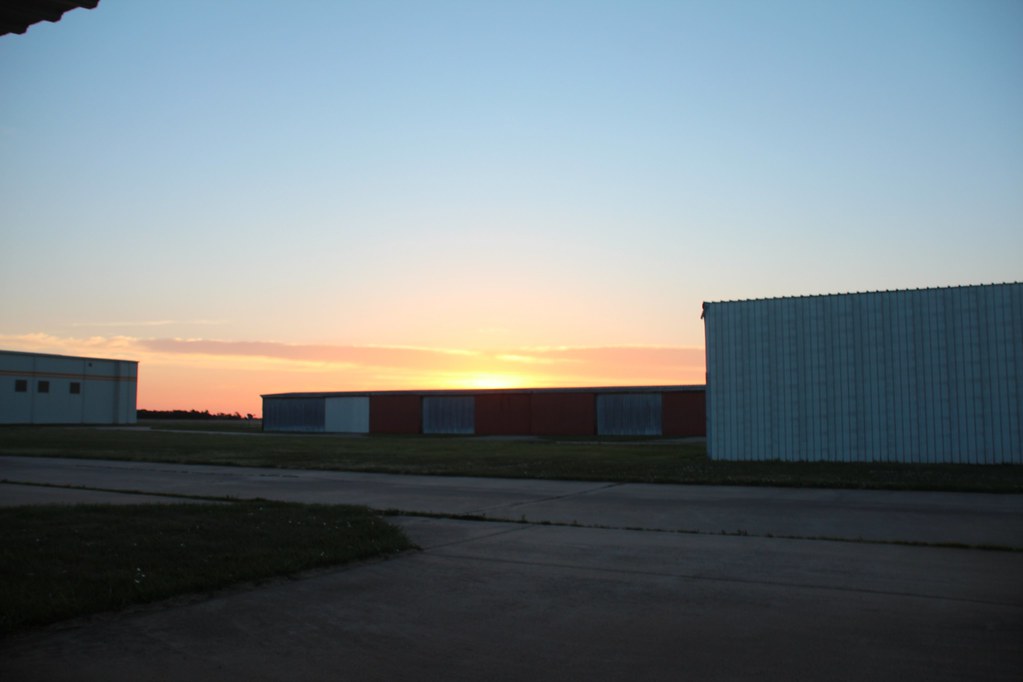 Here’s one of the beautiful views we got as we flew north to meet the Trimotor. 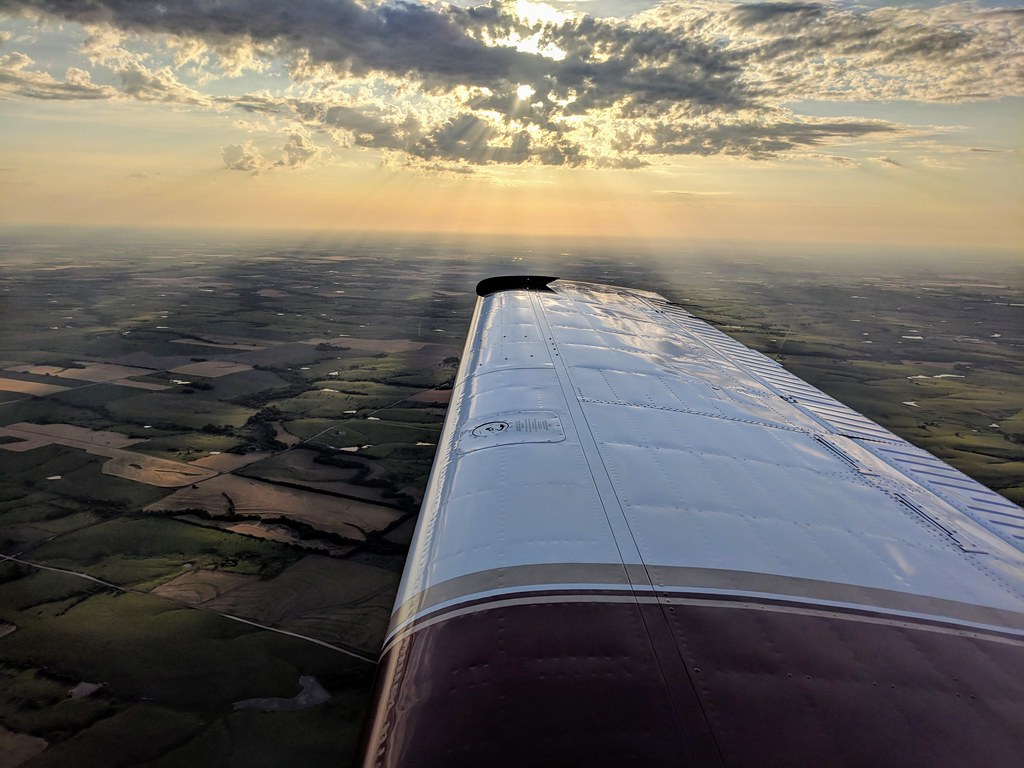 It was quite something to share a ramp with that historic machine. Here’s a photo of our plane not far from the Trimotor. 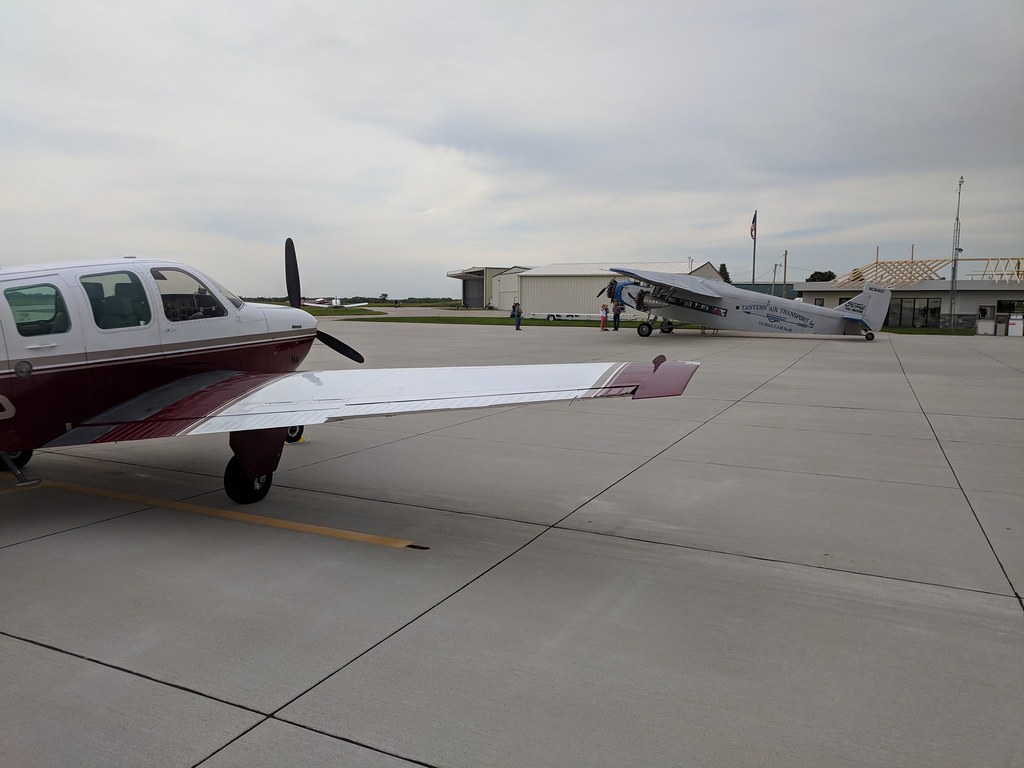 After we got there, we checked in for the flight, had a great pancake and sausage breakfast, and then into the Trimotor. The engines fired up with a most satisfying low rumble, and soon we were aloft — cruising along at 1000 feet, in that (by modern standards) noisy, slow, and beautiful machine. We explored the Nebraska countryside from the air before returning 20 minutes later. I asked the boys what they thought.

“AWESOME!” was the reply. And I agreed. 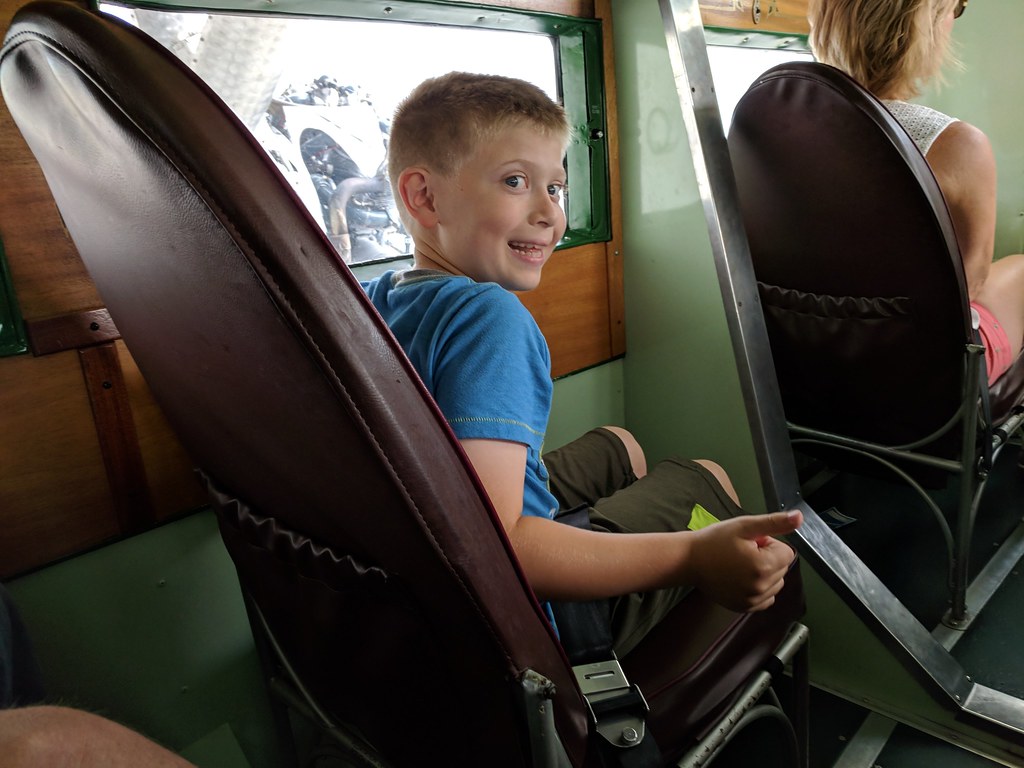 Jacob and Oliver have long enjoyed pretending to be flight attendants when we fly somewhere. They want me to make airline-sounding announcements, so I’ll say something like, “This is your captain speaking. In a few moments, we’ll begin our descent into O’Neill. Flight attendants, prepare the cabin for arrival.” Then Jacob will say, “Please return your tray tables that you don’t have to their full upright and locked position, make sure your seat belt is tightly fastened, and your luggage is stowed. This is your last chance to visit the lavatory that we don’t have. We’ll be on the ground shortly.”

Awhile back, I loaded up some zip-lock bags with peanuts and found some particularly small bottles of pop. Since then, it’s become tradition on our longer flights for them to hand out bags of peanuts and small quantities of pop as we cruise along — “just like the airlines.” A little while back, I finally put a small fridge in the hangar so they get to choose a cold beverage right before we leave. (We don’t typically have such things around, so it’s a special treat.)

Last week, as I was thinking about Father’s Day, I told them how I remembered visiting my dad at work, and how he’d let me get a bottle of Squirt from the pop machine there (now somewhat rare). So when we were at the airport on Saturday, it brought me a smile to hear, “DAD! This pop machine has Squirt! Can we get a can? It’s only 75 cents!” “Sure – after our Trimotor flight.” “Great! Oh, thank you dad!”

I realized then I was passing a small but special memory on to another generation. I’ve written before of my childhood memories of my dad, and wondering what my children will remember of me. Martha isn’t old enough yet to remember her cackles of delight as we play peek-a-boo or the books we read at bedtime. Maybe Jacob and Oliver will remember our flights, or playing with mud, or researching dusty maps in a library, playing with radios, or any of the other things we do. Maybe all three of them will remember the cans of Squirt I’m about to stock that hangar fridge with.

But if they remember that I love them and enjoy doing things with them, they will have remembered the most important thing. And that is another special thing I got from my parents, and can pass on to another generation.

2 thoughts on “Memories, Father’s Day, and an 89-year-old plane”