“Well Jacob, do you think we should set up our own pretend phone company in the house?”

Not long ago, my parents had dug up the old phone I used back in the day. We still have a landline, and Jacob was having fun discovering how an analog phone works. I told him about the special number he could call to get the time and temperature read out to him. He discovered what happens if you call your own number and hang up. He figured out how to play “Mary Had a Little Lamb” using touchtone keys (after a slightly concerned lecture from me setting out some rules to make sure his “musical dialing” wouldn’t result in any, well, dialing.)

He was hooked. So I thought that taking it to the next level would be a good thing for a rainy day. I have run Asterisk before, though I had unfortunately gotten rid of most of my equipment some time back. But I found a great deal on a Cisco 186 ATA (Analog Telephone Adapter). It has two FXS lines (FXS ports simulate the phone company, and provide dialtone and ring voltage to a connected phone), and of course hooks up to the LAN.

We plugged that in, and Jacob was amazed to see its web interface come up. I had to figure out how to configure it (unfortunately, it uses SCCP rather than SIP, and figuring out Asterisk’s chan_skinny took some doing, but we got there.)

I set up voicemail. He loved it. He promptly figured out how to record his own greetings. We set up a second phone on the other line, so he could call between them. The cordless phones in our house support SIP, so I configured one of them as a third line. He spent a long time leaving himself messages. 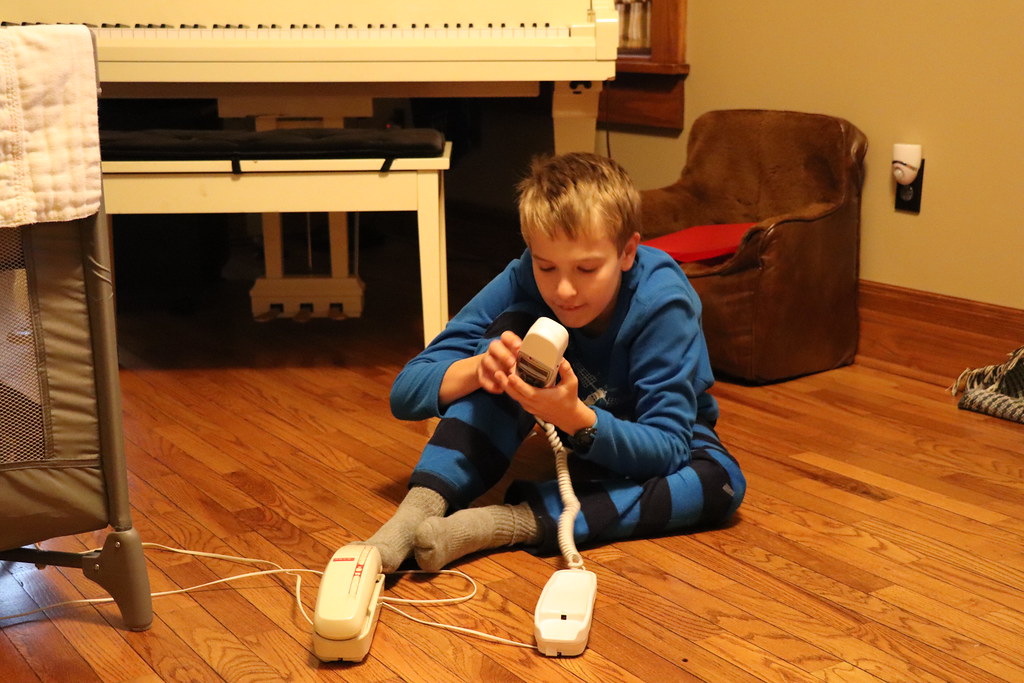 Pretty soon we both started having ideas. I set up extension 777, where he could call for the time. Then he wanted a way to get the weather forecast. Well, weather-util generates a text-based report. With it, a little sed and grep tweaking, the espeak TTS engine, and a little help from sox, I had a shell script worked up that would read back a forecast whenever he called a certain extension. He was super excited! “That’s great, dad! Can it also read weather alerts too?” Sure! weather-util has a nice option just for that. Both boys cackled as the system tried to read out the NWS header (their timestamps like 201711031258 started with “two hundred one billion…”)

Then I found an online source for streaming NOAA Weather Radio feeds – Jacob enjoys listening to weather radio – and I set up another extension he could call to listen to that. More delight!

So he recorded a menu, then came and hovered by me while I hacked up extensions.conf, then eagerly went back to the phone to try it. Oh the excitement of hearing hisown voice, and finding that it worked! Pretty soon he was designing sub-menus (“OK Dad, so we’ll set it up so people can press 2 for the weather, and then choose if they want weather radio or the weather report. I’m recording that now. Got it?”)

He has informed me that next Saturday we will build an intercom system “like we have at school.” I’m going to have to have some ideas on how to tie Squeezebox in with Asterisk to make that happen, I think. Maybe this will do.