“Was there anything you didn’t like about our trip?”

Jacob’s answer: “That we had to leave so soon!”

When I first heard about the Vintage Computer Festival Midwest, I almost immediately got the notion that I wanted to go. Besides the TRS-80 CoCo II up in my attic, I also have fond memories of an old IBM PC with CGA monitor, a 25MHz 486, an Alpha also in my attic, and a lot of other computers along the way. I didn’t really think my boys would be interested.

But I mentioned it to them, and they just lit up. They remembered the Youtube videos I’d shown them of old line printers and punch card readers, and thought it would be great fun. I thought it could be a great educational experience for them too — and it was.

It also turned into a trip that combined being a proud dad with so many of my other interests. Quite a fun time. 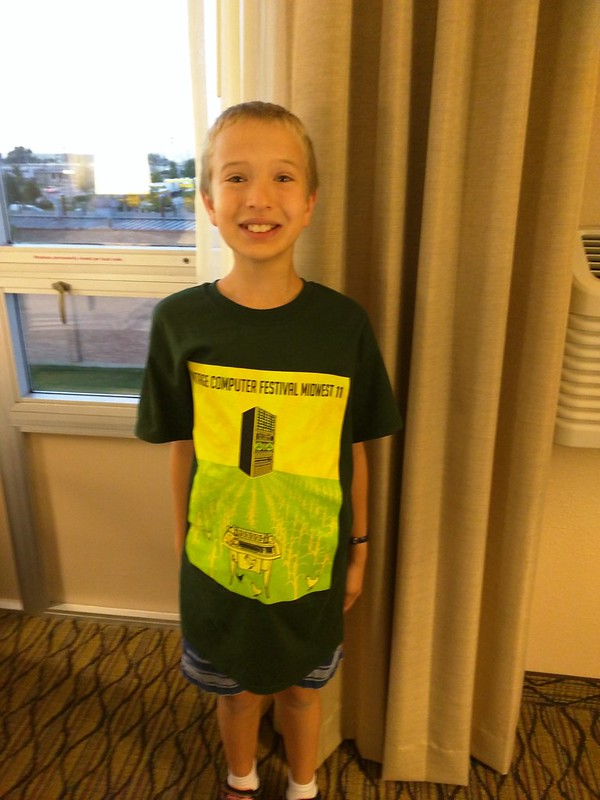 Chicago being not all that close to Kansas, I planned to fly us there. If you’re flying yourself, solid flight planning is always important. I had already planned out my flight using electronic tools, but I always carry paper maps with me in the cockpit for backup. I got them out and the boys and I planned out the flight the old-fashioned way.

Here’s Oliver using a scale ruler (with markings for miles corresponding to the scale of the map) and Jacob doing calculating for us. We measured the entire route and came to within one mile of the computer’s calculation for each segment — those boys are precise! 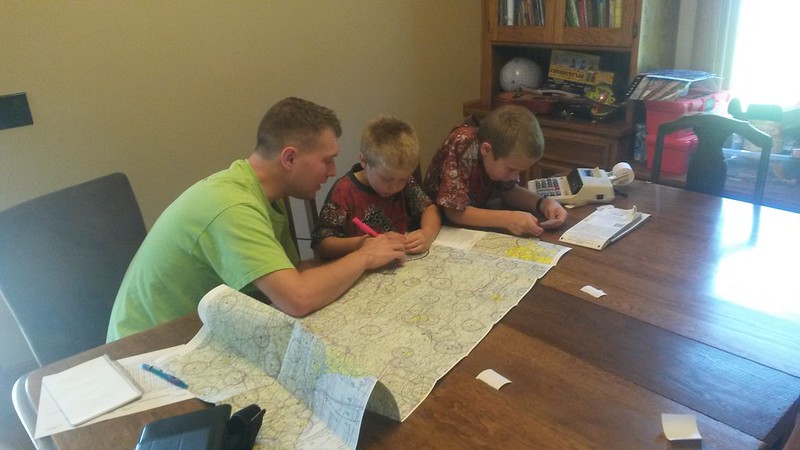 We figured out how much fuel we’d use, where we’d make fuel stops, etc.

The day of our flight, we made it as far as Davenport, Iowa when a chance of bad weather en route to Chicago convinced me to land there and drive the rest of the way. The boys saw that as part of the exciting adventure!

Jacob is always interested in maps, and had kept wanting to use my map whenever we flew. So I dug an old Android tablet out of the attic, put Avare on it (which has aviation maps), and let him use that. He was always checking it while flying, sometimes saying this over his headset: “DING. Attention all passengers, this is Captain Jacob speaking. We are now 45 miles from St. Joseph. Our altitude is 6514 feet. Our speed is 115 knots. We will be on the ground shortly. Thank you. DING”

Here he is at the Davenport airport, still busy looking at his maps: 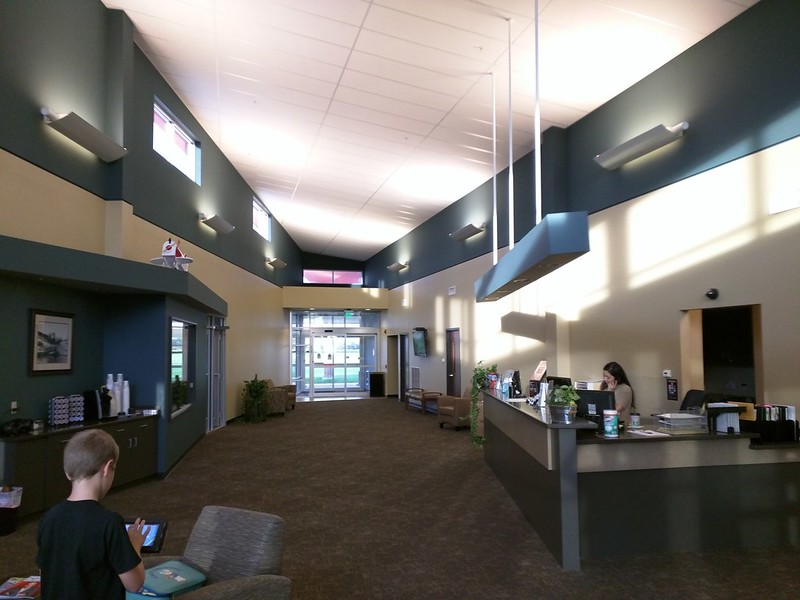 Every little airport we stopped at featured adults smiling at the boys. People enjoyed watching a dad and his kids flying somewhere together.

Oliver kept busy too. He loves to help me on my pre-flight inspections. He will report every little thing to me – a scratch, a fleck of paint missing on a wheel cover, etc. He takes it seriously. Both boys love to help get the plane ready or put it away.

Jacob quickly gravitated towards a few interesting things. He sat for about half an hour watching this old Commodore plotter do its thing (click for video): 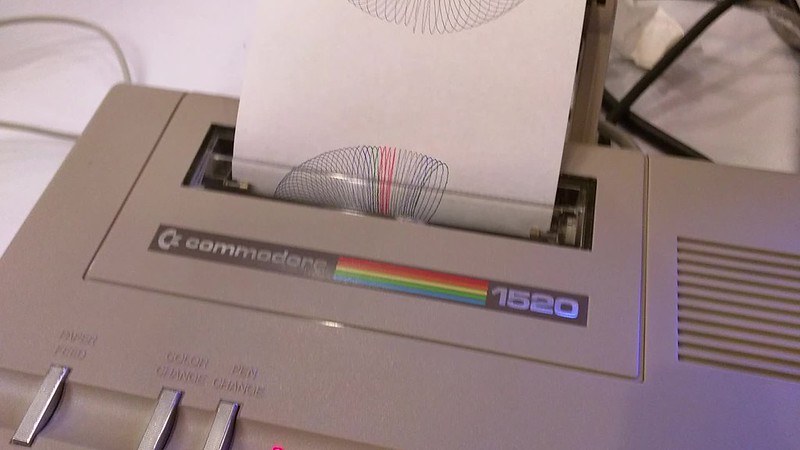 His other favorite thing was the phones. Several people had brought complete analog PBXs with them. They used them to demonstrate various old phone-related hardware; one had several BBSs running with actual modems, another had old answering machines and home-security devices. Jacob learned a lot about phones, including how to operate a rotary-dial phone, which he’d never used before! 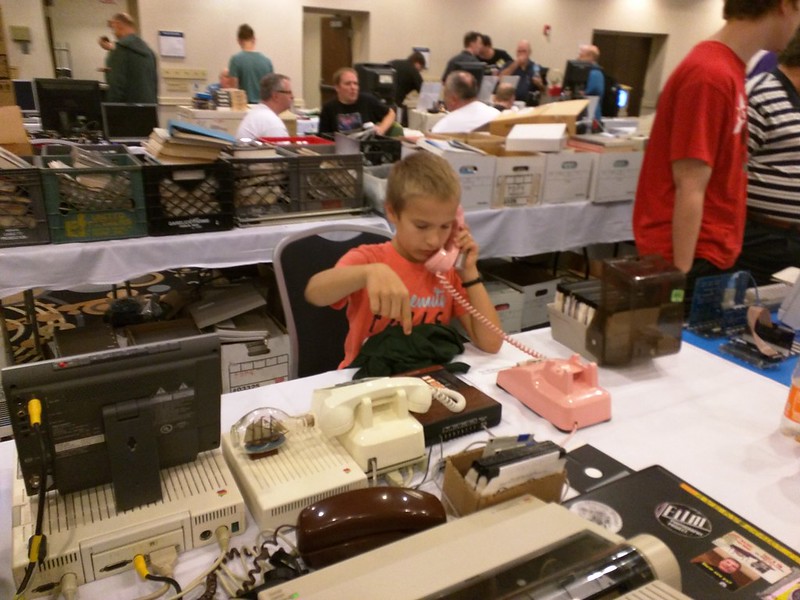 Oliver was drawn more to the old computers. He was fascinated by the IBM PC XT, which I explained was just about like a model I used to get to use sometimes. They learned about floppy disks and how computers store information. 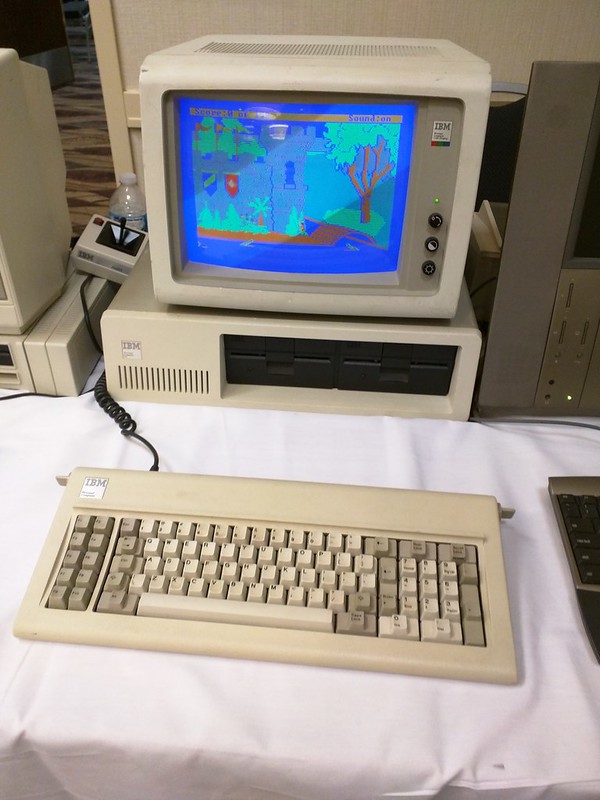 He hadn’t used joysticks much, and found Pong (“this is a soccer game!”) interesting. Somebody has also replaced the guts of a TRS-80 with a Raspberry Pi running a SNES emulator. This had thoroughly confused me for a little while, and excited Oliver.

Jacob enjoyed an old TRS-80, which, through a modern Ethernet interface and a little computation help in AWS, provided an interface to Wikipedia. Jacob figured out the text-mode interface quickly. Here he is reading up on trains. 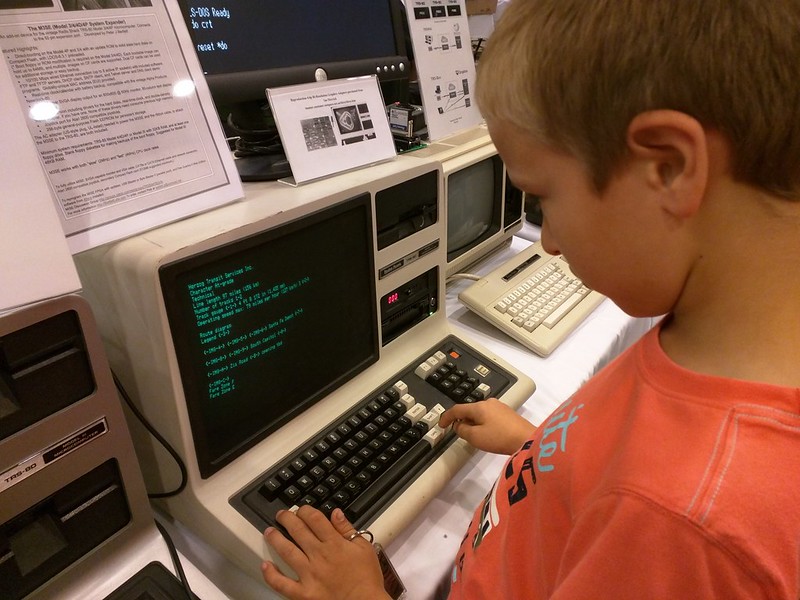 I had no idea that Commodore made a lot of adding machines and calculators before they got into the home computer business. There was a vast table with that older Commodore hardware, too much to get on a single photo. But some of the adding machines had their covers off, so the boys got to see all the little gears and wheels and learn how an adding machine can do its printing. 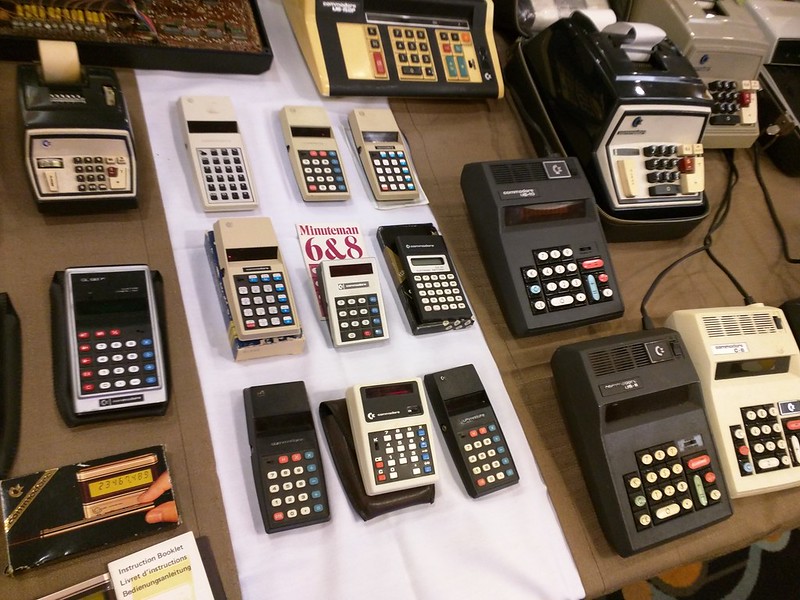 And then we get to my favorite: the big iron. Here is a VAX — a working VAX. When you have a computer that huge, it’s easier for the kids to understand just what something is. 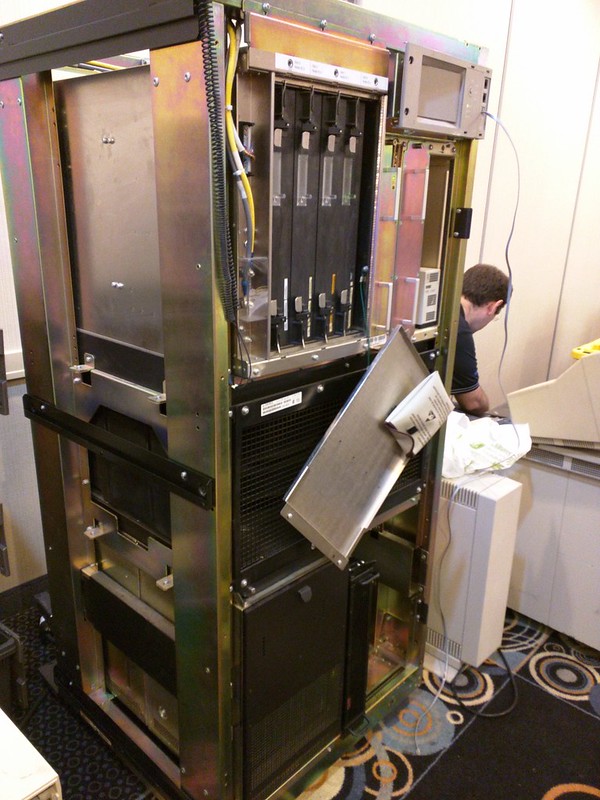 When we encountered the table from the Glenside Color Computer Club, featuring the good old CoCo IIs like what I used as a kid (and have up in my attic), I pointed out to the boys that “we have a computer just like this that can do these things” — and they responded “wow!” I think they are eager to try out floppy disks and disk BASIC now.

Some of my favorites were the old Unix systems, which are a direct ancestor to what I’ve been working with for decades now. Here’s AT&T System V release 3 running on its original hardware: 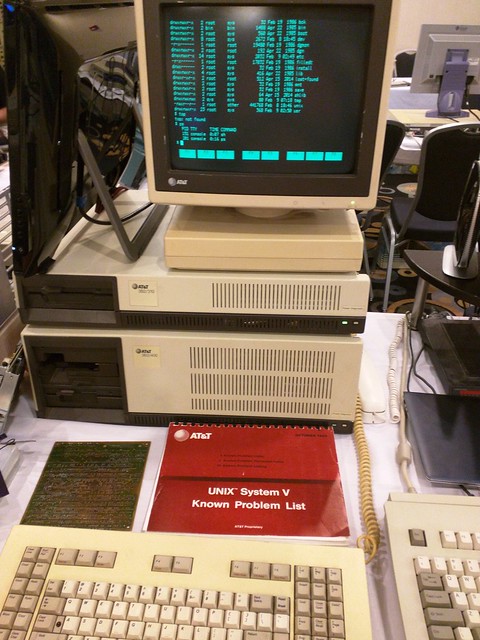 And there were a couple of Sun workstations there, making me nostalgic for my college days. If memory serves, this one is actually running on m68k in the pre-Sparc days: 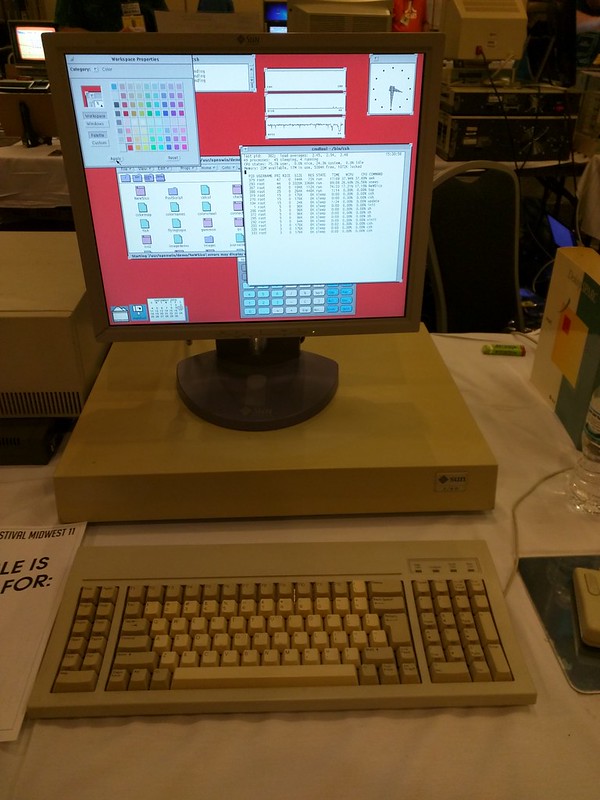 After all the excitement of the weekend, both boys zonked out for awhile on the flight back home. Here’s Jacob, sleeping with his maps still up. 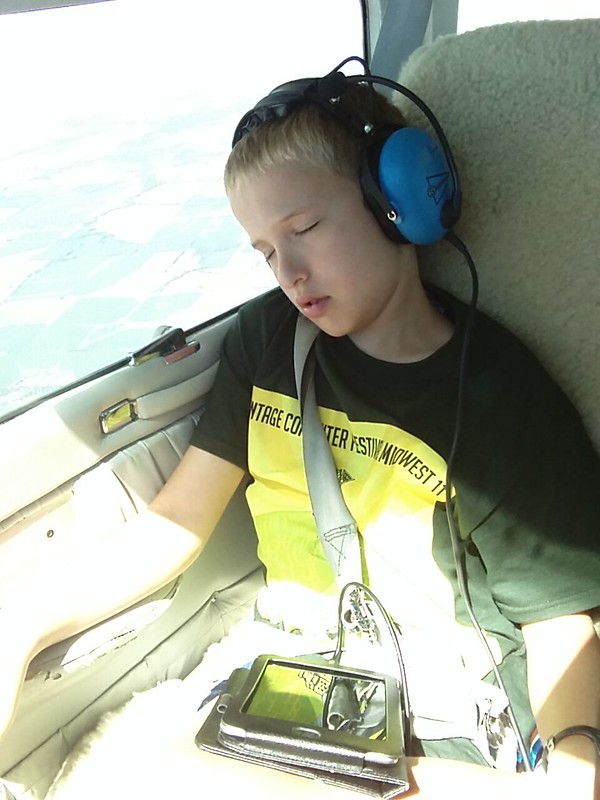 As we were nearly home, we hit a pocket of turbulence, the kind that feels as if the plane is dropping a bit (it’s perfectly normal and safe; you’ve probably felt that on commercial flights too). I was a bit concerned about Oliver; he is known to get motion sick in cars (and even planes sometimes). But what did I hear from Oliver?

“Whee! That was fun! It felt like a roller coaster! Do it again, dad!”

3 thoughts on “Two Boys, An Airplane, Plus Hundreds of Old Computers”