Yesterday, Jacob (age 8) asked to help me put together a 30-year-old computer from parts in my basement. Meanwhile, Oliver (age 5) asked Laura to help him learn cursive. Somehow, this doesn’t seem odd for a Saturday at our place. 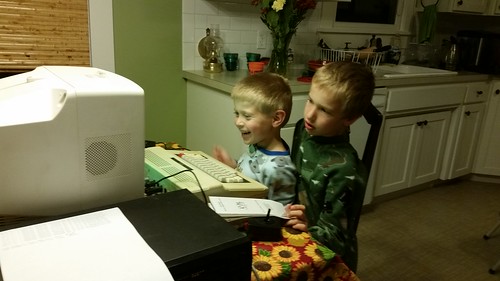 Let me tell you how this came about.

I’ve had a project going on for a while now to load data from old floppies. It’s been fun, and had a surprise twist the other day: my parents gave me an old TRS-80 Color Computer II (aka “CoCo 2”). It was, in fact, my first computer, one they got for me when I was in Kindergarten. It is nearly 30 years old.

I have been musing lately about the great disservice Apple did the world by making computers easy to learn — namely the fact that few people ever bother to learn about them. Who bothers to learn about them when, on the iPhone for instance, the case is sealed shut, the lifespan is 1 or 2 years for many purchasers, and the platform is closed in lots of ways?

I had forgotten how finicky computers used to be. But after some days struggling with IDE incompatibilities, booting issues, etc., when I actually managed to get data off a machine that had last booted in 1999, I had quite the sense of accomplishment, which I rarely have lately. I did something that was hard to do in a world where most of the interfaces don’t work with equipment that old (even if nominally they are supposed to.)

The CoCo is one of those computers normally used with a floppy drive or cassette recorder to store programs. You type DIR, and you feel the clack of the drive heads through the desk. You type CLOAD and you hear the relay click closed to turn on the tape motor. You wiggle cables around until they make contact just right. You power-cycle for the times when the reset button doesn’t quite do the job. The details of how it works aren’t abstracted away by innumerable layers of controllers, interfaces, operating system modules, etc. It’s all right there, literally vibrating your desk.

So I thought this could be a great opportunity for Jacob to learn a few more computing concepts, such as the difference between mass storage and RAM, plus a great way to encourage him to practice critical thinking. So we trekked down to the basement and came up with handfulls of parts. We brought up the computer, some joysticks, all sorts of tangled cables. We needed adapters, an old TV. Jacob helped me hook everything up, and then the moment of truth: success! A green BASIC screen!

I added more parts, but struck out when I tried to connect the floppy drive. The thing just wouldn’t start up right whenever the floppy controller cartridge was installed. I cleaned the cartridge. I took it apart, scrubbed the contacts, even did a re-seat of the chips. No dice.

So I fired up my CoCo emulator (xroar), and virtually “saved” some programs to cassette (a .wav file). I then burned those .wav files to an audio CD, brought up an old CD player from the basement, connected the “cassette in” plug to the CD player’s headphone jack, and presto — instant programs. (Well, almost. It takes a couple of minutes to load a program from audio codes.)

The picture above is Oliver cackling at one of the very simplest BASIC programs there is: “number find.” The computer picks a random number between 1 and 2000, and asks the user to guess it, giving a “too low” or “too high” clue with each incorrect guess. Oliver delighted in giving invalid input (way too high numbers, or things that weren’t numbers at all) and cackled at the sarcastic error messages built into the program. During Jacob’s turn, he got very serious about it, and is probably going to be learning about how to calculate halfway points before too long.

But imagine my pride when this morning, Jacob found the new CD I had made last night (correcting a couple recordings), found my one-line instruction on just part of how to load a program, and correctly figured out by himself all the steps to do in order (type CLOAD on the CoCo, advance the CD to the proper track, press play on the player, wait for it to load on the CoCo, then type RUN).

I ordered a replacement floppy controller off eBay tonight, and paid $5 for a coax adapter that should fix some video quality issues. I rescued some 5.25″ floppies from my trash can from another project, so they should have plenty of tools for exploration.

It is so much easier for them to learn how a disk drive works, and even what the heck a track is, when you can look at a floppy drive with the cover off and see the heads move. There are other things we can do with more modern equipment — Jacob has shown a lot of interest in Arduino projects — but I have so far drawn a blank on ways to really let kids discover how a modern PC (let alone a modern phone or tablet) works.

Update Nov. 24: Every so often, the world surprises me by deciding to, well, read one of my random blog posts. For the benefit of those of you that don’t already know my boys, you might want to know that among their common play activites are turning trees into pretend trains, typing at a manual typewriter, reading, writing their own books, using a cassette recorder, building a PC and learning to use bash or xmonad, making long paper tapes with an adding machine, playing records on a record player, building electric gizmos, and even making mud balls.

I am often asked about the role of the computer in the lives, given that my hobby and profession involves computers. The answer: less than that of most of their peers. I look for opportunities for them to learn by doing, discovering, playing, or imagining. I make no presumption that they will develop the passion for computers that I did. What I want is for them to have the curiosity and drive to learn everything there is to know about whatever they do develop a passion for, so they will be great at it.