It’s been a hot year in Kansas this year. Really hot. Our average high for July was 101F / 38C. It’s also been extremely dry. So we haven’t had too many pleasant opportunities to enjoy a bit of an upcycling project I had with the boys. 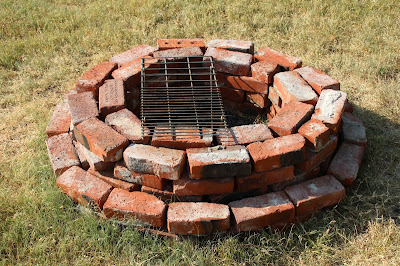 When we renovated our old farmhouse, we had two chimneys removed. The bricks were saved in a large pile out back, and we haven’t really touched them in the last 5 years.

I got the idea at some point that it would be nice to have a fire ring on our yard. The boys love campfire-style cooking, and enjoy helping gather kindling and watching the fire grow. I had looked at fire rings in stores, but just couldn’t bring myself to pay $60 or $100 or even more for what was really a piece of round metal. I decided we would find a way to build our own fire ring.

So the idea of chimney bricks seemed perfect. Some of these bricks still have mortar on them, so the result is imperfect, but it is functional. More importantly, the boys helped. They picked out bricks one at a time, set them in the wheelbarrow (or even carried a few themselves, as Jacob insisted on doing sometimes.) Then we’d dump them out on the ground, and I’d make some attempt at making the thing round, while the boys would put them on the pile.

We did this over the course of several evenings, with me filling in on some of it after they lost interest. When we got it done, they of course loved cooking outside. I made sure that we placed it in a place that will be in the shade every summer evening so we’d be comfortable. I made no attempt to mortar it in; this way, it’s easy to move or resize. And it’s safer for the boys than a metal one, since the outer edge never even gets warm to the touch.

Anyhow, it finally got a little cooler last week, so we cooked out there for dinner two days in a row. One day, after eating, the boys came back out to help put out the fire with the hose. After that, Jacob and I went out there to eat dessert. He sat on the grass, and I sat down next to him. He scooted over a bit to be closer to me. Pretty soon, Oliver came running out too, and sat on my lap. The three of us just sat there on the grass, eating our desserts and enjoying the evening. It’s the kind of moment that makes a dad happy.

The other evening, they again helped me put out the fire with a hose. They’d been active that day, so after I finished hosing down the fire ring, I gave them each a small spray with the hose. After a brief flicker of indecision, they both decided this was hilarious. Jacob took off running, yelling “You’ll never catch me!” (And clearly hoping I would.) Oliver copied him, and so I proceeded to chase them around the yard with a hose for quite awhile. There was much laughter from them, and they wound up totally soaked and happy. Another good evening. You never know what will happen outdoors, but so often it is very good.