I’m back from one of the best experiences a father can have – a whole day with two happy boys.

I took Jacob (5) and Oliver (2) camping with me out by our creek. This was the first time we’d camped there, and also the first time I’d taken the boys camping without Terah along. So there were some unknowns, but it worked out great.

When we got out there, I started to get the tents set up. The boys were interested, but pretty soon invented some games. A large nearby tree with plenty of low branches on its trunk became their locomotive, and certain sticks made the “train” go forward or backward, whistle, or ding its bell. This was good for quite some entertainment. Another nearby tree, near the bank of the creek, had some erosion near it. Combined with its roots, this made some natural steps. Jacob named some the “enter steps” and others the “exit steps”, and I sure heard about it if I walked the wrong way on the exit steps.

We then gathered up sticks and the things we needed to build a campfire. We cooked up brats and zucchini. Although it was later than usual for supper, they loved it just the same. 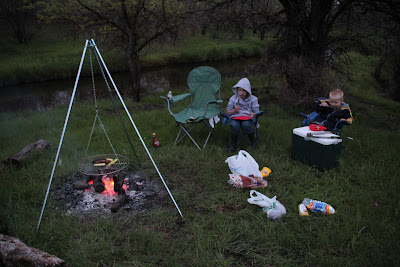 After that, we made smores for dessert – another thing they loved. Then, one of the big highlights: sleeping in tents and sleeping bags. I had showed them the sleeping bags earlier, and they were excited to try them out.

Morning was beautiful – when the sun came out, it was shining right on the heavy dew on the ground, making the grass shine brightly. 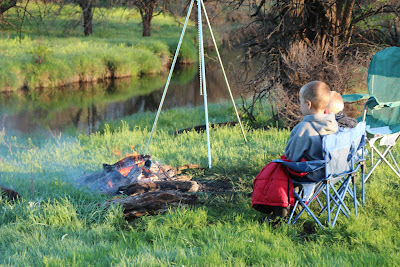 It’s not every day that they get to start their morning slowly waking up by a warm fire. They were content to sit for quite awhile while I got things going for breakfast. 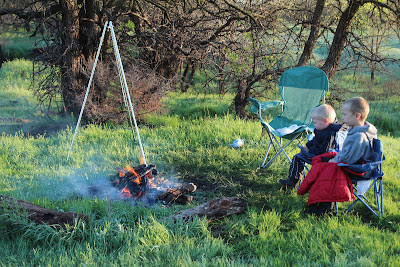 It was chilly outside, so I helped them change clothes by the fire where. I then cooked them some scrambled eggs – which, despite the lack of salt and pepper, seemed so much better than normal to the boys – and then we went exploring. I took them to some areas with erosion, which Jacob called “the big holes in the ground.” It’s really quite beautiful in spring, which this cellphone photo completely fails to capture. 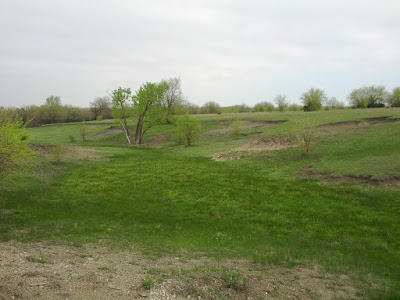 The boys loved climbing up and down these areas, some of which were quite tall. They discovered different kinds of rock on the way up and down, and with my help avoided discovering too much of the mud at the bottom.

We hiked back to our camping spot through grass almost as tall as Oliver — much to his delight — and then after warming up by the fire for a bit, went off in the other direction. There is a grove of trees by the creek over there, which — surprise — became another train. Here are the boys explaining how it works.

They helped pack things back up, too. Actually, it took some convincing to get Jacob to not pull up all the stakes for the tent before I was ready for them.

Things didn’t go perfectly, but then, they never do, and that was OK with everyone. Camping is an adventure, and it wouldn’t be an adventure if you knew every detail beforehand.

It is rare in life to be able to think that I have enough time to do anything the boys might want to do. Spend half an hour pretending a tree is a train — sure, no problem.

I have a lot of happy memories about the creek. We camped at the same spot where I went fishing or camped as a child. There have been family gatherings and even a birthday party out there. The boys and I have enjoyed a hike or a wagon ride to the area, but as I learned, nothing could possibly match the excitement of camping there.

It is wonderful to add another happy memory of a time at the creek. And it’s even better to see another generation of Goerzens discover that there’s a lot of fun to be had down by the creek.