Jacob has been eagerly awaiting this day for at least, well, 2 days now. This morning he started asking questions. All day long he has been wondering how long until the big event. And that event is the arrival of the UPS truck carrying a special $8 package for him.

And in that $8 package is not a DVD, or a book, or a toy, but rather 12 rolls of adding machine tape (totaling 1/3 of a mile). Oh yes, our four-year-old can hardly contain his excitement over office supplies. Let me back up a bit to explain.

I am always on the lookout for a certain kind of toy. The sort of thing that you don’t find in the toy section of a store. The sort of thing that is interesting and engages the curiosity of our boys, that most people would consider would toss, and that usually costs less than $5. Along those lines, Jacob has an old manual typewriter he can use, he and I built a switchbox full of switches and light bulbs that the boys love to play with, we built him a command-line-only PC out of spare parts, the boys have some radios they can use, and one day I salvaged a decades-old adding machine that was going to be thrown out.

Jacob liked it — he enjoys number and letter games — and had some fun, but didn’t zealously engage with it until just a few days ago.

He sat down at his table and started making “cards”. He will print out a bunch of numbers, making a strip a couple of feet long, and then say, “Dad, I made another card for you!” We will then happily accept the card and he will continue making more. Here he is, holding up one of his cards: 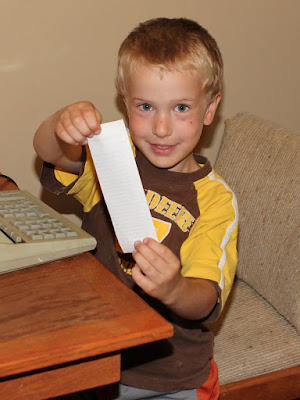 Jacob had a ton of fun making them, and Oliver wanted in on the action too. Oliver was somewhat interested in the adding machine, but not as much as Jacob, and Jacob didn’t want to share. So somehow they decided that Oliver would run and get cards from Jacob and then take them to whatever parent Jacob said. Today Jacob said, “Dad, the Oliver delivery service will bring you a card!”

Saturday morning we had some time to hang around and play, so we played some adding machine tape games. I tucked some long “cards” under my waistband, and the boys happily chased me all over the house trying to get them back. We also decorated: 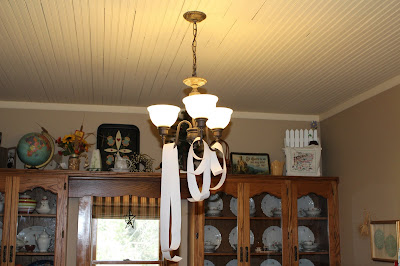 And here is what the room looked like — after some cleanup: 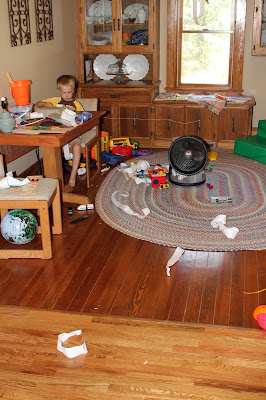 That orange bucket on the desk is my “card bucket” where I can put all the cards he gives me. He even helpfully empties it out into the recycle bin when there are too many “old cards” in it!

But then tragedy struck — it was out of paper! I ordered a 12-roll pack off Amazon, and boy was it a long couple of days until it arrived. Today before the UPS truck got here, I showed him how we could feed old paper through and print on the back side — an incredible innovation, it seemed!

Terah had a conversation with him earlier that went like this:

Terah: “Jacob, we need to clean up the house.”

Terah: “Because some people are coming over.”

Terah: “Ah, well yes he will be here too, but your great uncle and aunt are coming.”

It is hard to describe Jacob’s excitement when the package arrived. I quickly opened it up, and at his great uncle’s prompting, he counted to see if he really did get 12 rolls of paper. “IT IS TWELVE ROLLS! YAY!” And then we quickly installed it in the machine and off he went. At his great uncle’s prompting, he started writing a J on each “card”. This meant “Jacob”, or maybe he’d put two J’s, meaning “To John From Jacob”, or perhaps the two J’s meant “To Terah From Jacob” – he’d always have to clue us in.

Anyhow, for an $8 investment in paper this has brought hours of joy to our boys. Even though Jacob isn’t yet really using it to perform arithmetic, it is setting him up to enjoy that sort of thing — and encouraging his curiosity. Both good things.

2 thoughts on “Jacob and the Amazing Technicolor Adding Machine”