And so began a “trip” aboard our hotel train in Indianapolis, conducted by our very own Jacob and Oliver. 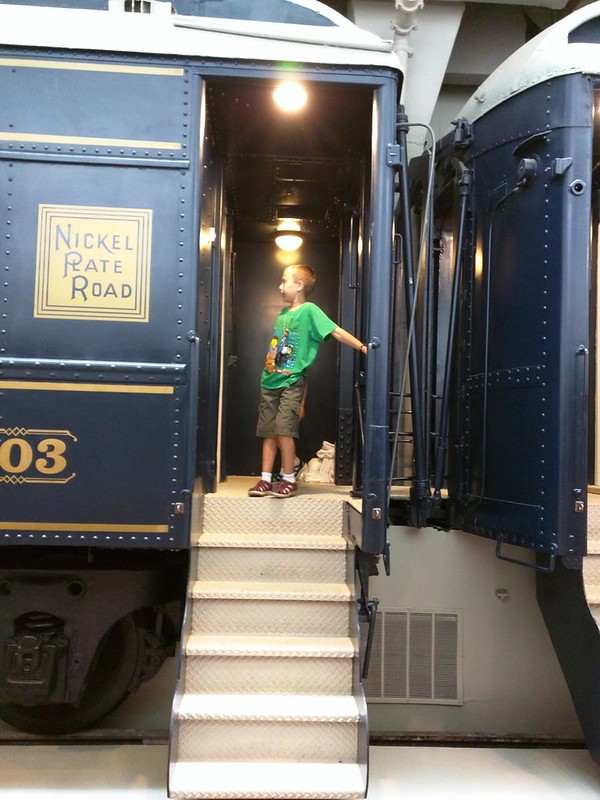 Because, well, what could be more fun than spending a few days in the world’s only real Pullman sleeping car, on its original service track, inside a hotel? 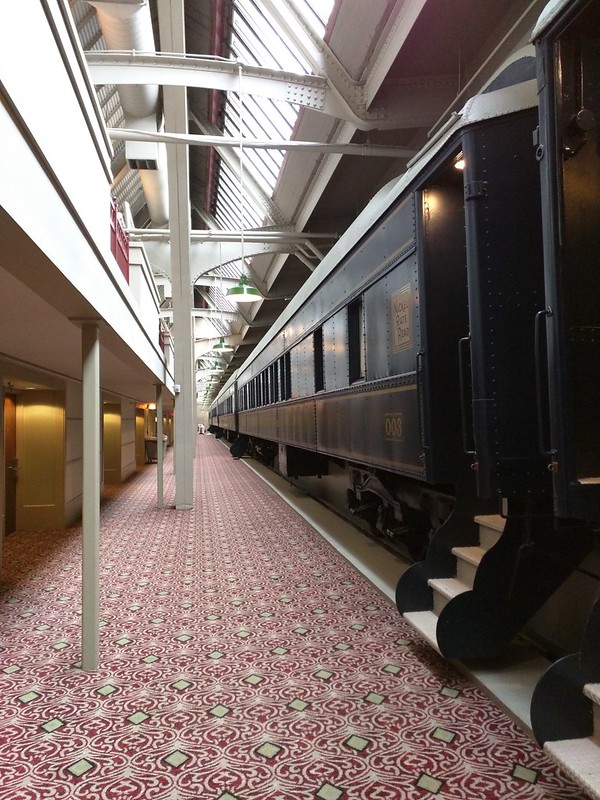 We were on a family vacation to Indianapolis, staying in what two railfan boys were sure to enjoy: a hotel actually built into part of the historic Indianapolis Union Station complex. This is the original train track and trainshed. They moved in the Pullman cars, then built the hotel around them. Jacob and Oliver played for hours, acting as conductors and engineers, sending their “train” all across the country to pick up and drop off passengers.

Have you ever seen a kid’s face when you introduce them to something totally new, and they think it is really exciting, but a little scary too?

That was Jacob and Oliver when I introduced them to saganaki (flaming cheese) at a Greek restaurant. The conversation went a little like this:

“Our waitress will bring out some cheese. And she will set it ON FIRE — right by our table!”

“Will it burn the ceiling?”

“About a medium-sized fire.”

“Then what will happen?”

“She’ll yell ‘OPA!’ and we’ll eat the cheese after the fire goes out.”

“Does it taste good?”

It turned out several tables had ordered saganaki that evening, so whenever I saw it coming out, I’d direct their attention to it. Jacob decided that everyone should call it “opa” instead of saganaki because that’s what the waitstaff always said. Pretty soon whenever they’d see something appear in the window from the kitchen, there’d be craning necks and excited jabbering of “maybe that’s our opa!”

And when it finally WAS our “opa”, there were laughs of delight and I suspect they thought that was the best cheese ever. 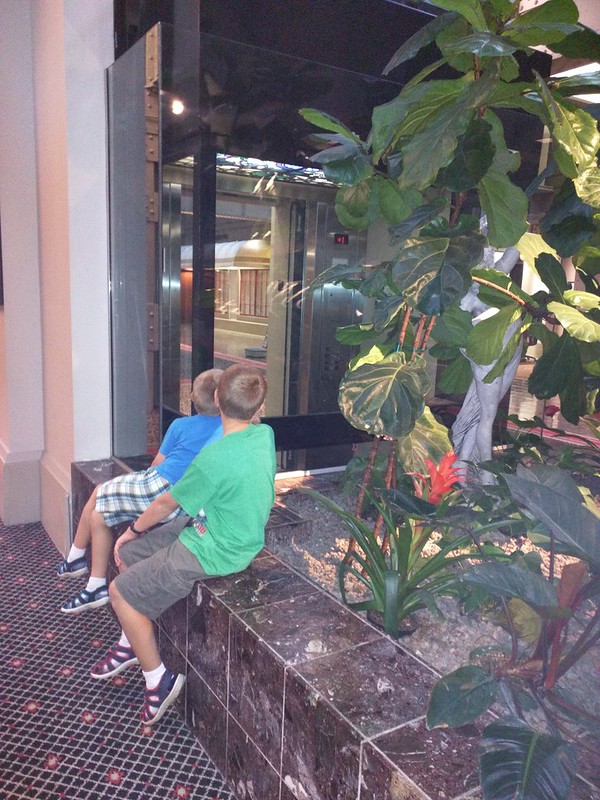 Fun times were had pressing noses against the glass around the elevator. Laura and I sat on a nearby sofa while Jacob and Oliver sat by the elevators, anxiously waiting for someone to need to go up and down. They point and wave at elevators coming down, and when elevator passengers waved back, Oliver would burst out giggling and run over to Laura and me with excitement. 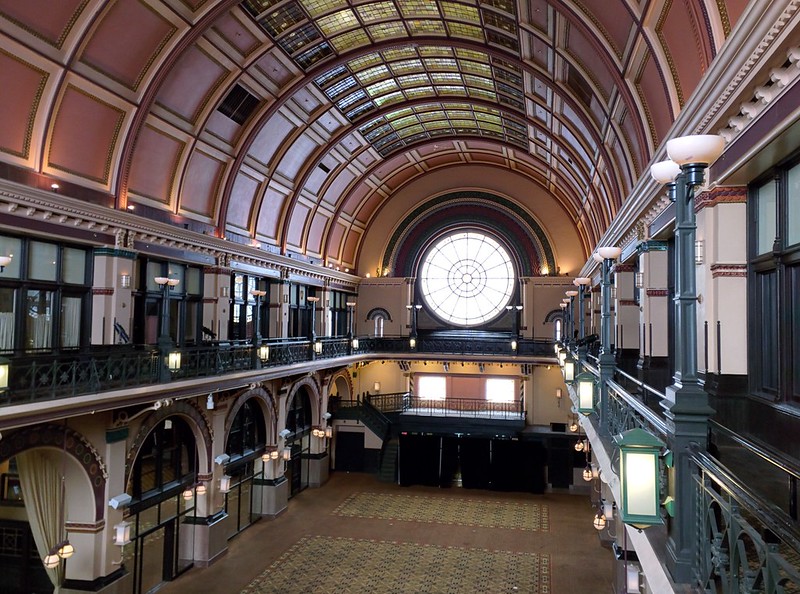 We got to see the grand hall of Indianapolis Union Station — what a treat to be able to set foot in this magnificent, historic space, the world’s oldest union station. We even got to see the office where Thomas Edison worked, and as a hotel employee explained, was fired for doing too many experiments on the job.

Indy has a system of elevated walkways spanning quite a section of downtown. It can be rather complex navigating them, and after our first day there, I offered to let Jacob and Oliver be the leaders. Boy did they take pride in that! They stopped to carefully study maps and signs, and proudly announced “this way” or “turn here” – and were usually correct. 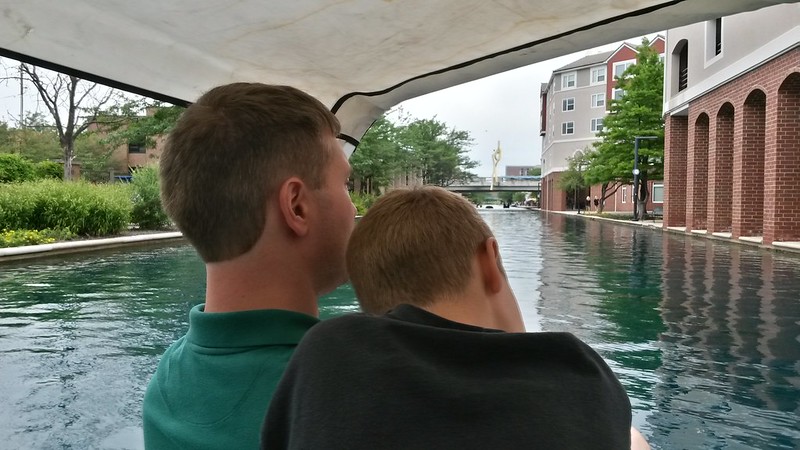 And it was the same in the paddleboat we took down the canal. Both boys wanted to be in charge of steering, and we only scared a few other paddleboaters. 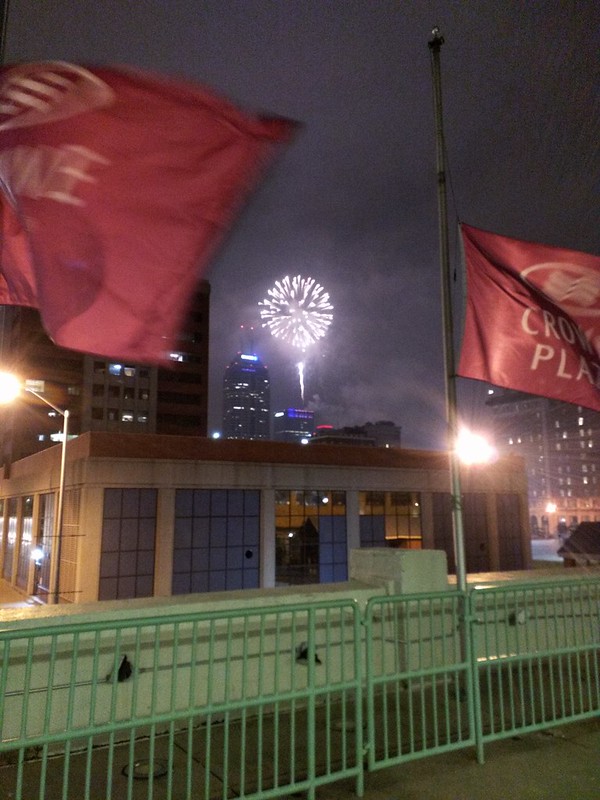 Our visit ended with the grand fireworks show downtown, set off from atop a skyscraper. I had been scouting for places to watch from, and figured that a bridge-walkway would be great. A couple other families had that thought too, and we all watched the 20-minute show in the drizzle.

By far my favorite photo from the week is this one, of Jacob and Oliver asleep, snuggled up next to each other under the covers. They sure are loving and caring brothers, and had a great time playing together. 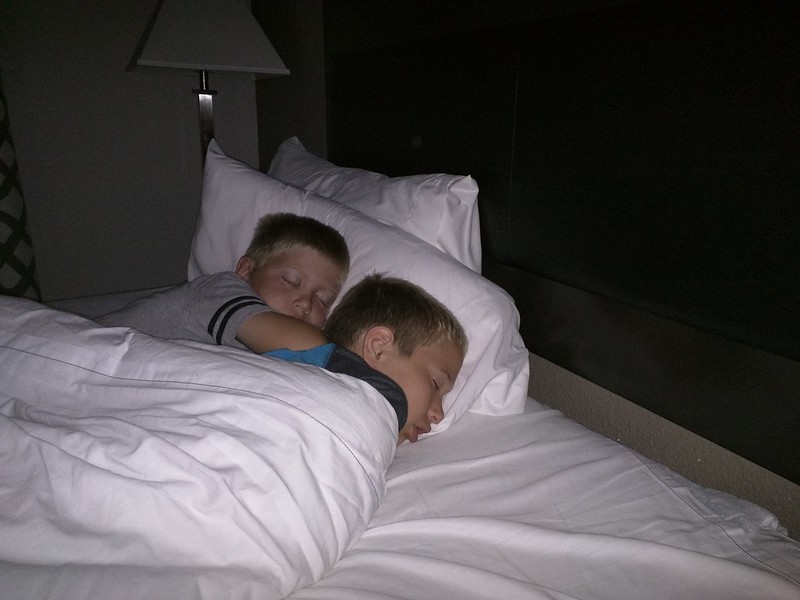 11 thoughts on “All Aboard”