“Would you like to hike a mountain?” That question caught me by surprise. It was early in 2000, and I had flown to Tucson for a job interview. Ian Murdock was starting a new company, Progeny, and I was being interviewed for their first hire.

“Well,” I thought, “hiking will be fun.” So we rode a bus or something to the top of the mountain and then hiked down. Our hike was full of — well, everything. Ian talked about Tucson and the mountains, about his time as the Debian project leader, about his college days. I asked about the plants and such we were walking past. We talked about the plans for Progeny, my background, how I might fit in. It was part interview, part hike, part two geeks chatting. Ian had no HR telling him “you can’t go hiking down a mountain with a job candidate,” as I’m sure HR would have. And I am glad of it, because even 16 years later, that is still by far the best time I ever had at a job interview, despite the fact that it ruined the only pair of shoes I had brought along — I had foolishly brought dress shoes for a, well, job interview.

I guess it worked, too, because I was hired. Ian wanted to start up the company in Indianapolis, so over the next little while there was the busy work of moving myself and setting up an office. I remember those early days – Ian and I went computer shopping at a local shop more than once to get the first workstations and servers for the company. Somehow he had found a deal on some office space in a high-rent office building. I still remember the puzzlement on the faces of accountants and lawyers dressed up in suits riding in the elevators with us in our shorts and sandals, or tie-die, next to them.

Progeny’s story was to be a complicated one. We set out to rock the world. We didn’t. We didn’t set out to make lasting friendships, but we often did. We set out to accomplish great things, and we did some of that, too.

We experienced a full range of emotions there — elation when we got hardware auto-detection working well or when our downloads looked very popular, despair when our funding didn’t come through as we had hoped, being lost when our strategy had to change multiple times. And, as is the case everywhere, none of us were perfect.

I still remember the excitement after we published our first release on the Internet. Our little server that could got pegged at 100Mb of outbound bandwidth (that was something for a small company in those days.) The moment must have meant something, because I still have the mrtg chart from that day on my computer, 15 years later.

We made a good Linux distribution, an excellent Debian derivative, but commercial success did not flow from it. In the succeeding months, Ian and the company tried hard to find a strategy that would stick and make our big break. But that never happened. We had several rounds of layoffs when hoped-for funding never materialized. Ian eventually lost control of the company, and despite a few years of Itanium contract work after I left, closed for good.

Looking back, Progeny was life — compressed. During the good times, we had joy, sense of accomplishment, a sense of purpose at doing something well that was worth doing. I had what was my dream job back then: working on Debian as I loved to do, making the world a better place through Free Software, and getting paid to do it. And during the bad times, different people at Progeny experienced anger, cynicism, apathy, sorrow for the loss of our friends or plans, or simply a feeling to soldier on. All of the emotions, good or bad, were warranted in their own way.

Bruce Byfield, one of my co-workers at Progeny, recently wrote a wonderful memoriam of Ian. He wrote, “More than anything, he wanted to repeat his accomplishment with Debian, and, naturally he wondered if he could live up to his own expectations of himself. That, I think, was Ian’s personal tragedy — that he had succeeded early in life, and nothing else he did with his life could quite measure up to his expectations and memories.”

Ian was not the only one to have some guilt over Progeny. I, for years, wondered if I should have done more for the company, could have saved things by doing something more, or different. But I always came back to the conclusion I had at the time: that there was nothing I could do — a terribly sad realization.

In the years since, I watched Ubuntu take the mantle of easy-to-install Debian derivative. I saw them reprise some of the ideas we had, and even some of our mistakes. But by that time, Progeny was so thoroughly forgotten that I doubt they even realized they were doing it.

I had long looked at our work at Progeny as a failure. Our main goal was never accomplished, our big product never sold many copies, our company eventually shuttered, our rock-the-world plan crumpled and forgotten. And by those traditional measurements, you could say it was a failure.

But I have come to learn in the years since that success is a lot more that those things. Success is also about finding meaning and purpose through our work. As a programmer, success is nailing that algorithm that lets the application scale 10x more than before, or solving that difficult problem. As a manager, success is helping team members thrive, watching pieces come together on projects that no one person could ever do themselves. And as a person, success comes from learning from our experiences, and especially our mistakes. As J. Michael Straczynski wrote in a Babylon 5 episode, loosely paraphrased: “Maybe this experience will be a good lesson. Too bad it was so painful, but there ain’t no other kind.”

The thing about Progeny is this – Ian built a group of people that wanted to change the world for the better. We gave it our all. And there’s nothing wrong with that.

Progeny did change the world. As us Progeny alumni have scattered around the country, we benefit from the lessons we learned there. And many of us were “different”, sort of out of place before Progeny, and there we found others that loved C compilers, bootloaders, and GPL licenses just as much as we did. We belonged, not just online but in life, and we went on to pull confidence and skill out of our experience at Progeny and use them in all sorts of ways over the years.

And so did Ian. Who could have imagined the founder of Debian and Progeny would one day lead the cause of an old-guard Unix turning Open Source? I run ZFS on my Debian system today, and Ian is partly responsible for that — and his time at Progeny is too.

So I can remember Ian, and Progeny, as a success. And I leave you with a photo of my best memento from the time there: an original unopened boxed copy of Progeny Linux. 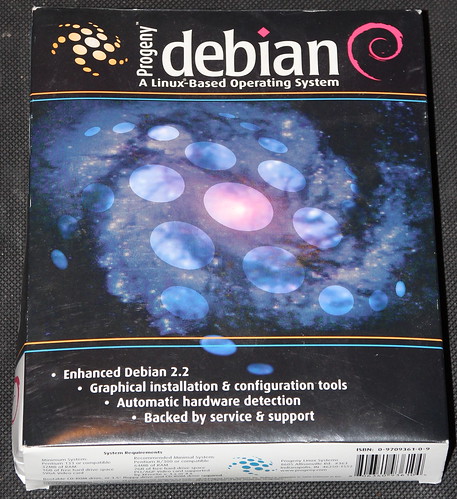 9 thoughts on “Hiking a mountain with Ian Murdock”