Sometimes, children are so excited you just can’t resist. Jacob and Oliver have been begging for a train trip for awhile now, so Laura and I took advantage of a day off school to take them to the little town of Galesburg, IL for a couple days.

Galesburg is a special memory for me; nearly 5 years ago, it was the first time Jacob and I took an Amtrak trip somewhere, just the two of us. And, separately, Laura’s first-ever train trip had been to Galesburg to visit friends.

There was excitement in the air. I was asked to supply a bedtime story about trains — I did. On the way to the train station — in the middle of the night — there was excited jabbering about trains. Even when I woke them up, they lept out of bed and raced downstairs, saying, “Dad, why aren’t you ready yet?”

As the train was passing through here at around 4:45AM, and we left home with some time to spare, we did our usual train trip thing of stopping at the one place open at such a time: Druber’s Donuts. 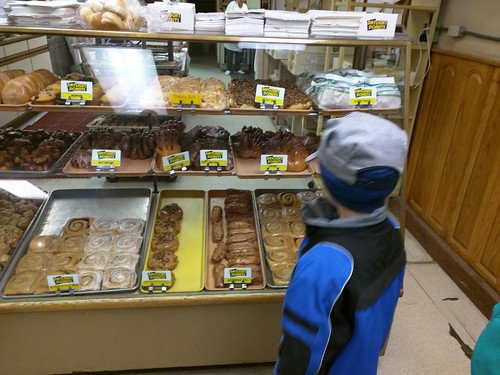 Much as Laura and I might have enjoyed some sleep once we got on the train, Jacob and Oliver weren’t having it. Way too much excitement was in the air. Jacob had his face pressed against the window much of the time, while Oliver was busy making “snake trains” from colored clay — complete with eyes. 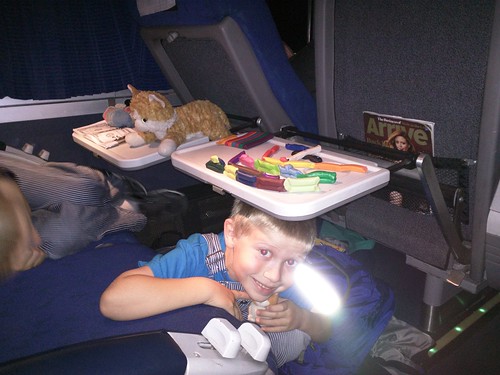 The boys were dressed up in their train hats and engineer overalls, and Jacob kept musing about what would happen if somebody got confused and thought that he was the real engineer. When an Amtrak employee played along with that later, he was quite thrilled!

We were late enough into Galesburg that we ate lunch in the dining car. A second meal there — what fun! Here they are anxiously awaiting the announcement that the noon reservations could make their way to the dining car. Oh, and jockeying for position to see who would be first and get to do the all-important job of pushing the button to open the doors between train cars. 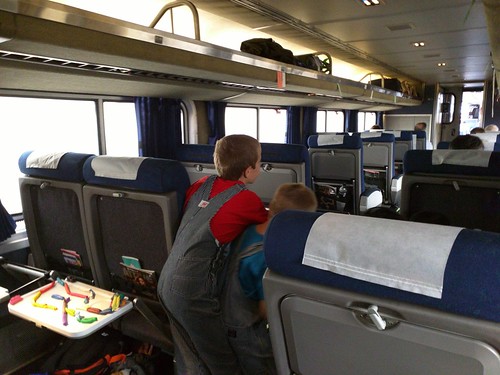 Even waiting for your food can be fun. 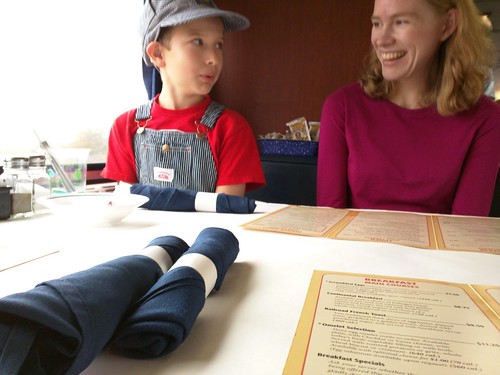 Upon arriving, we certainly couldn’t leave the train station until our train did, even though it was raining. 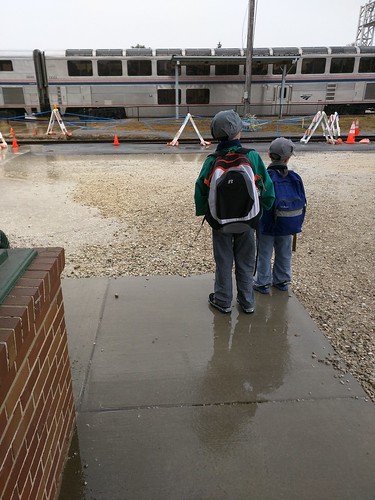 Right next to the train station is the Discovery Depot Children’s Museum. It was a perfect way to spend a few hours. Jacob really enjoyed the building wall, where you can assemble systems that use gravity (really a kinetic/potential energy experiment wall) to funnel rubber balls all over the place. He sticks out his tongue when he’s really thinking. Fun to watch. 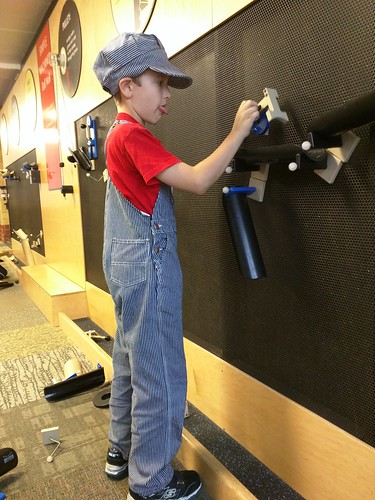 Meanwhile, Oliver had a great time with the air-powered tube system, complete with several valves that can launch things through a complicated maze of transparent tubes. 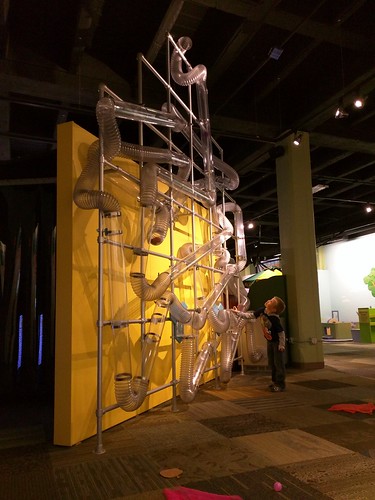 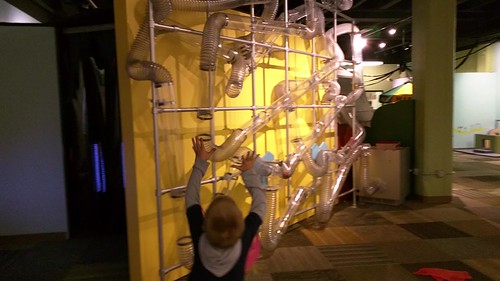 They both enjoyed pretending I was injured and giving me rides in the ambulance. I was diagnosed with all sorts of maladies — a broken leg, broken nose. One time Jacob held up the pretend stethoscope to me, and I said “ribbit.” He said, “Dad, you’ve got a bad case of frog! You will be in the hospital 190 days!” Later I would make up things like “I think my gezotnix is all froibled” and I was ordered to never leave the ambulance again. He told the story of this several times.

After the museum closed, we ate supper. Keep in mind the boys had been up since the middle of the night without sleeping and were still doing quite well! They did start to look a bit drowsy — I thought Oliver was about to fall asleep, but then their food came. And at the hotel, they were perfectly happy to invent games involving jumping off the bed.

Saturday, we rode over to Peck Park. We had heard about this park from members of our church in Kansas, but oddly even the taxi drivers hadn’t ever heard of it. It’s well known as a good place to watch trains, as it has two active lines that cross each other at a rail bridge. And sure enough, in only a little while, we took in several trains. 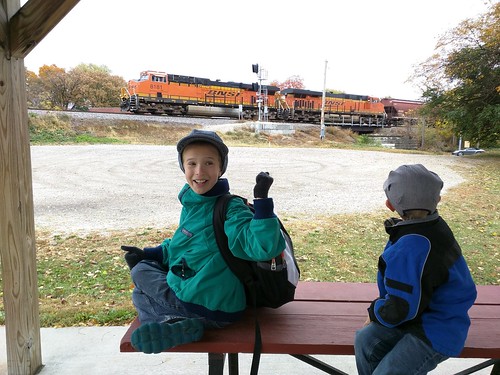 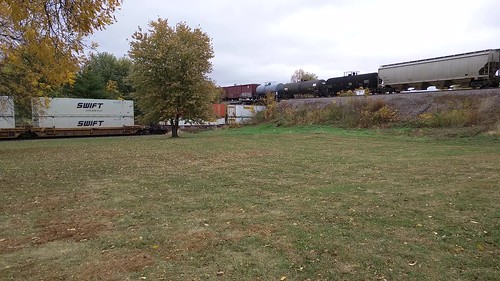 The rest of that morning, we explored Galesburg. We visited an antique mall and museum, saw the square downtown, and checked out a few of the shops — my favorite was the Stray Cat, featuring sort of a storefront version of Etsy with people selling art from recycled objects. But that wasn’t really the boys’ thing, so we drifted out of there on our way to lunch at Baked, where we had some delicious deep-dish pizza.

After that, we still had some time to kill before getting back on the train. We discussed our options. And what do you know — we ended up back at the children’s museum. We stopped at a bakery to get the fixins for a light supper on the train, and ate a nice meal in the dining car once we got on. Then, this time, they actually slept.

Before long, it was 3AM again and time to get back off the train. Oliver was zonked out sleepy. Somehow I managed to get his coat and backpack on him despite him being totally limp, and carried him downstairs to get off the train. Pretty soon we walked to our car and drove home.

We tucked them in, and then finally tucked ourselves in. Sometimes being really tired is well worth it.

1 thought on “The Train to Galesburg”