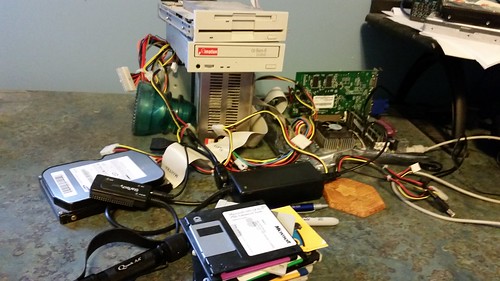 Yep, that’s a computer. Motherboard to the right, floppy drives and CD drive stacked on top of the power supply, hard drive to the left.

And it’s an OLD computer. (I had forgotten just how loud these old power supplies are; wow.)

The point of this exercise is to read data off the floppies that I have made starting nearly 30 years ago now (wow). Many were made with DOS, some were made on a TRS-80 Color Computer II (aka CoCo 2). There are 5.25″ disks, 3.25″ disks, and all sorts of formats. Most are DOS, but the TRS-80 ones use a different physical format. Some of the data was written by Central Point Backup (from PC Tools), which squeezed more data on the disk by adding an extra sector or something, if my vague memory is working.

Reading these disks requires low-level playing with controller timing, and sometimes the original software to extract the data. It doesn’t necessarily work under Linux, and certainly doesn’t work with USB floppies or under emulation. Hence this system.

It’s a bridge. Old enough to run DOS, new enough to use an IDE drive. I can then hook up the IDE drive to a IDE-to-USB converter and copy the data off it onto my Linux system.

But this was tricky. I started the project a few years ago, but life got in the way. Getting back to it now, with the same motherboard and drive, but I just couldn’t get it to boot. I eventually began to suspect some disk geometry settings, and with some detective work from fdisk in Linux plus some research into old BIOS disk size limitations, discovered the problem was a 2GB limit. Through some educated trial and error, I programmed the BOIS with a number of cylinders that worked, set it to LBA mode, and finally my 3-year-old DOS 6.2 installation booted.

I had also forgotten how finicky things were back then. Pop a floppy from a Debian install set into the drive, type dir b:, and the system hangs. I guess there was a reason the reset button was prominent on the front of the computer back then…

4 thoughts on “Computer Without a Case”