Laura and I walk into the boys’ room. We turn on the light. Nothing happens. (They’re sound sleepers.)

And then, “Meow!” (They enjoy playing with their stuffed cats that Laura got them for Christmas.)

Before long, it was out the door to the train station. We even had time to stop at a donut shop along the way.

We climbed into our family bedroom (a sleeping car room on Amtrak specifically designed for families of four), and as the train started to move, the excitement of what was going on crept in. Yes, it’s 2:42AM, but these are two happy boys: 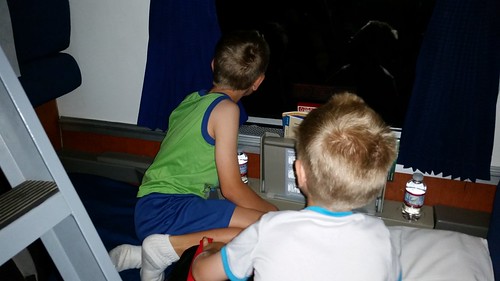 Jacob and Oliver love trains, and this was the beginning of a 3-day train trip from Newton to Seattle that would take us through Kansas, Colorado, the Rocky Mountains of New Mexico, Arizona, Los Angeles, up the California coast, through the Cascades, and on to Seattle. Whew!

Here we are later that morning before breakfast: 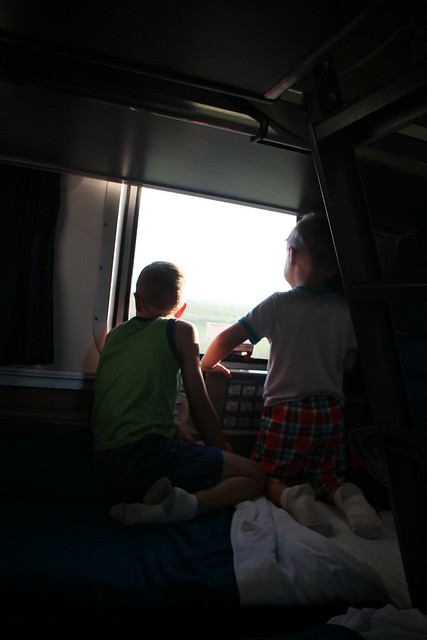 Here’s our train at a station stop in La Junta, CO: 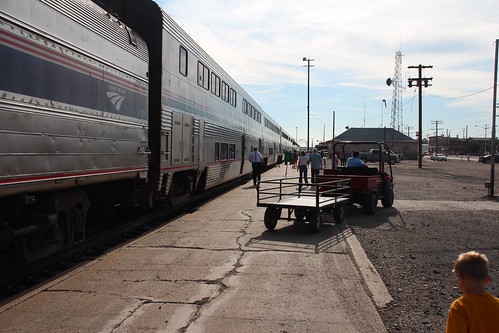 And at the beautiful small mountain town of Raton, NM: 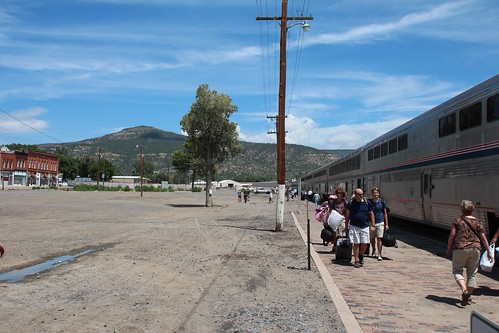 Some of the passing scenery in New Mexico: 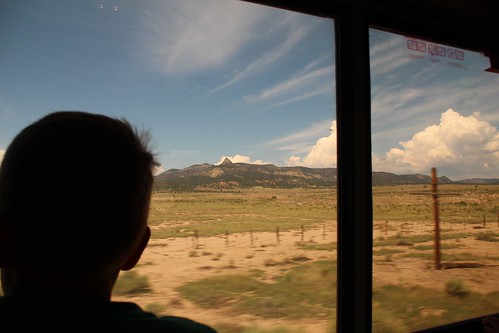 Through it all, we found many things to pass the time. I don’t think anybody was bored. I took the boys “exploring the train” several times — we’d walk from one end to the other and see what all was there. There was always the dining car for our meals, the lounge car for watching the passing scenery, and on the Coast Starlight, the Pacific Parlor Car.

Here we are getting ready for breakfast one morning. 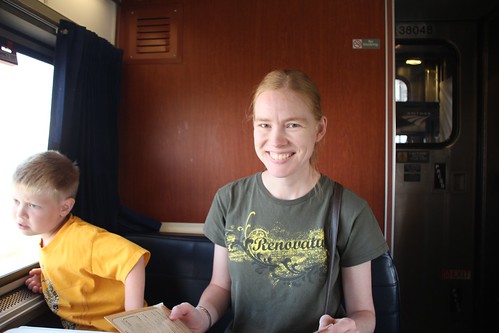 Getting to select meals and order in the “train restaurant” was a big deal for the boys. 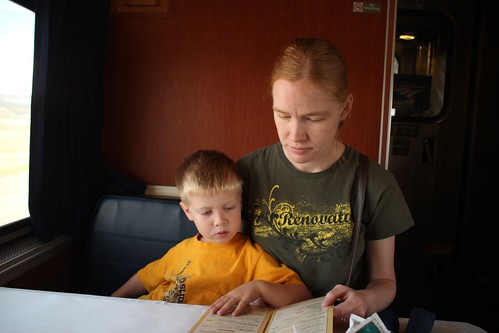 Laura brought one of her origami books, which even managed to pull the boys away from the passing scenery in the lounge car for quite some time. 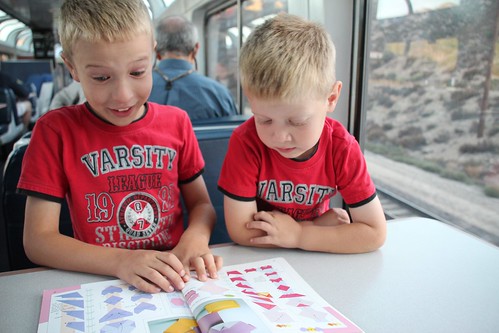 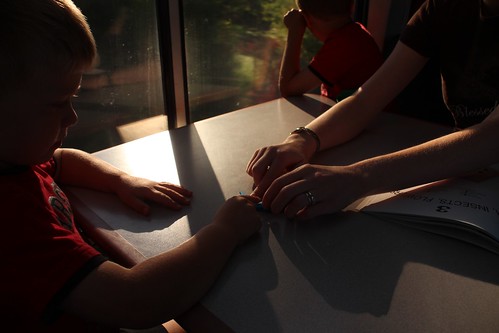 They had some fun wrapping themselves around my feet and challenging me to move. And were delighted when I could move even though they were trying to weight me down! 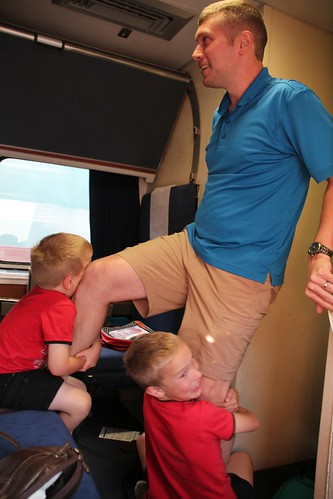 Several games of Uno were played, but even those sometimes couldn’t compete with the passing scenery: 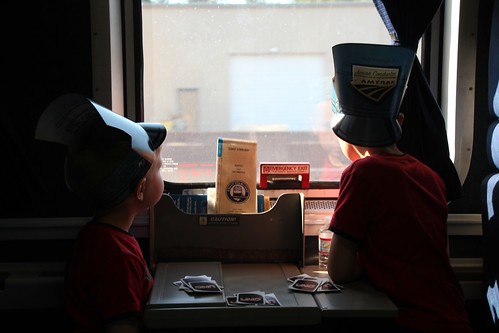 The Coast Starlight features the Pacific Parlor Car, which was built over 50 years ago for the Santa Fe Hi-Level trains. They’ve been updated; the upper level is a lounge and small restaurant, and the lower level has been turned into a small theater. They show movies in there twice a day, but most of the time, the place is empty. A great place to go with little boys to run around and play games. 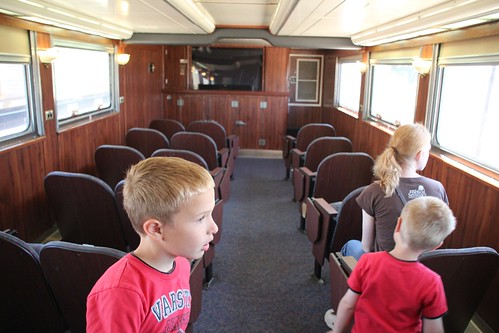 The boys and I sort of invented a new game: roadrunner and coyote, loosely based on the old Looney Tunes cartoons. Jacob and Oliver would be roadrunners, running around and yelling “MEEP MEEP!” Meanwhile, I was the coyote, who would try to catch them — even briefly succeeding sometimes — but ultimately fail in some hilarious way. It burned a lot of energy.

And, of course, the parlor car was good for scenery-watching too: 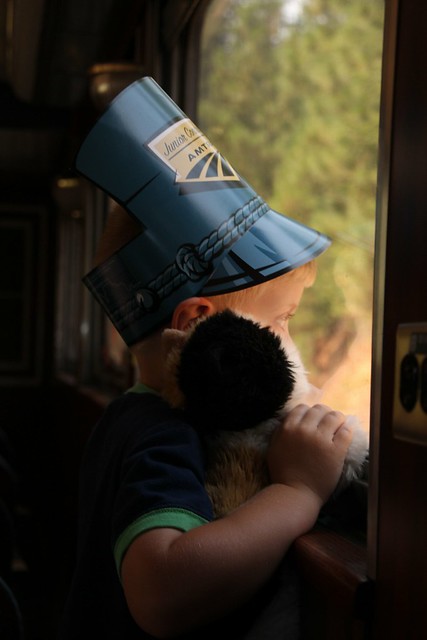 We were right along the Pacific Ocean for several hours – sometimes there would be a highway or a town between us and the beach, but usually there was nothing at all between us and the coast. It was beautiful to watch the jagged coastline go by, to gaze out onto the ocean, watching the birds — apparently so beautiful that I didn’t even think to take some photos.

Laura’s parents live in California, and took a connecting train. I had arranged for them to have a sleeping car room near ours, so for the last day of the trip, we had a group of 6. Here are the boys with their grandparents at lunch Wednesday: 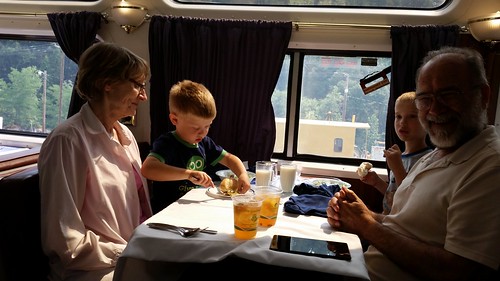 We stepped off the train in Seattle into beautiful King Street Station. 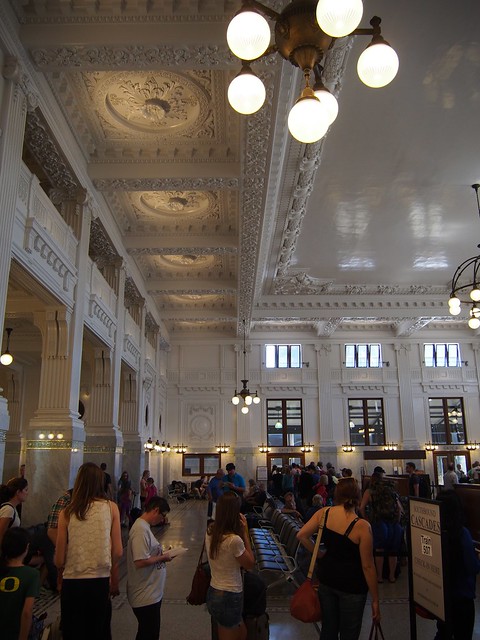 Our first day in Seattle was a quiet day of not too much. Laura’s relatives live near Lake Washington, so we went out there to play. The boys enjoyed gathering black rocks along the shore. 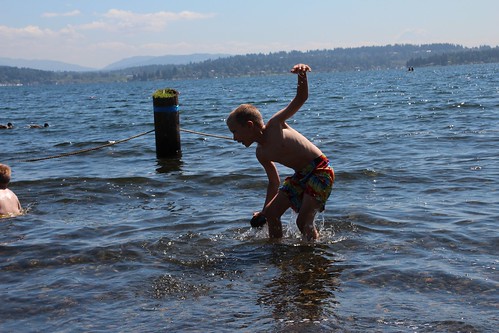 We went blackberry picking after that – filled up buckets for a cobbler.

The next day, we rode the Seattle Monorail. The boys have been talking about this for months — a kind of train they’ve never been on. That was the biggest thing in their minds that they were waiting for. They got to ride in the very front, by the operator. 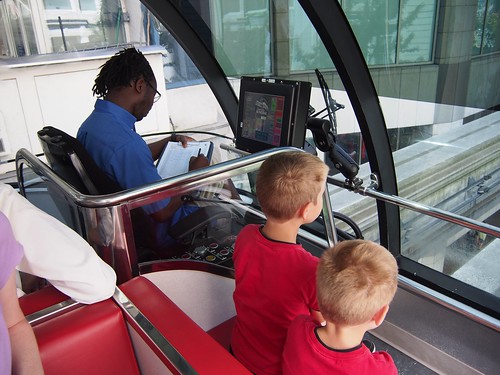 Nice view from up there. 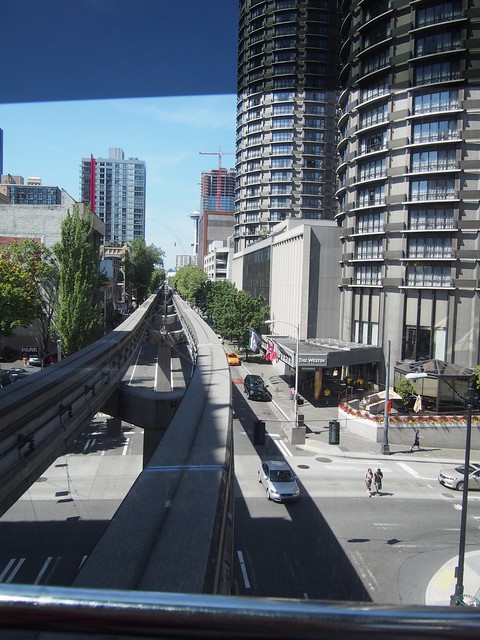 We walked through the Pike Market — I hadn’t been in such a large and crowded place like that since I was in Guadalajara: 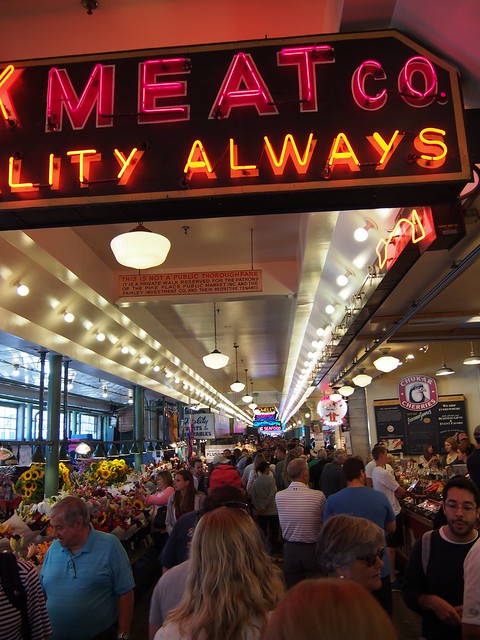 At the Seattle Aquarium, we all had a great time checking out all the exhibits. The “please touch” one was a particular hit. 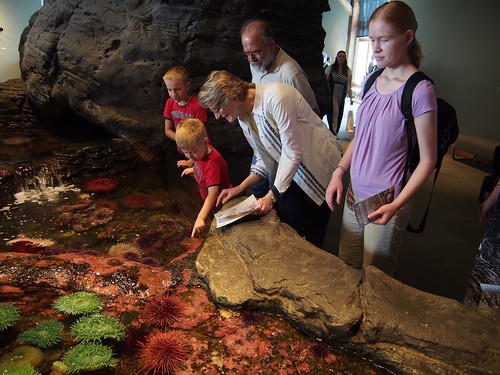 Walking underneath the salmon tank was fun too.

We spent a couple of days doing things closer to downtown. Laura’s cousin works at MOHAI, the Museum of History and Industry, so we spent a morning there. The boys particularly enjoyed the old periscope mounted to the top of the building, and the exhibit on chocolate (of course!) 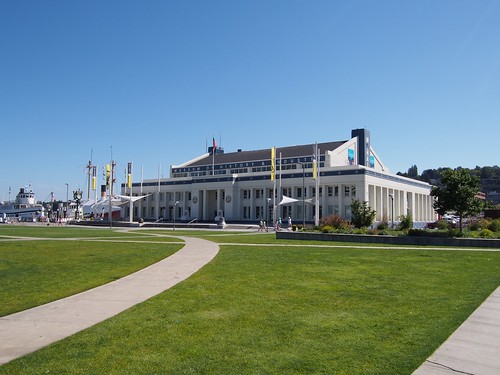 They love any kind of transportation, so of course we had to get a ride on the Seattle Streetcar that comes by MOHAI. 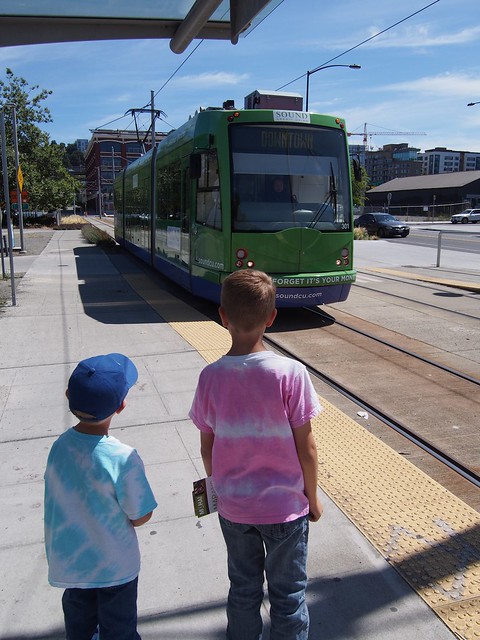 All weekend long, we had been noticing the seaplanes taking off from Lake Washington and Lake Union (near MOHAI). So finally I decided to investigate, and one morning while Laura was doing things with her cousin, the boys and I took a short seaplane ride from one lake to another, and then rode every method of transportation we could except for ferries (we did that the next day). Here is our Kenmore Air plane: 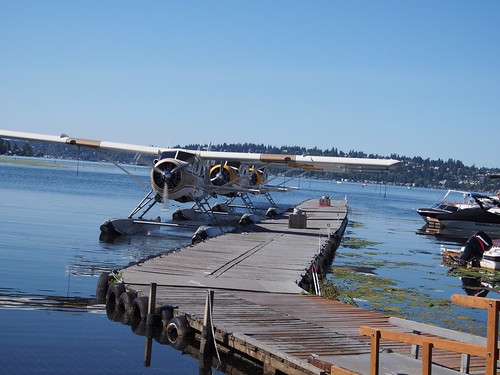 The view of Lake Washington from 1000 feet was beautiful: 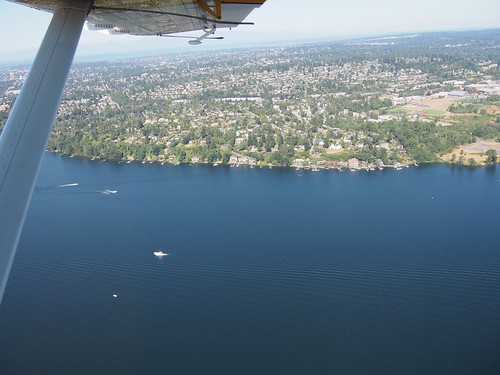 I think we got a better view than the Space Needle, and it probably cost about the same anyhow. 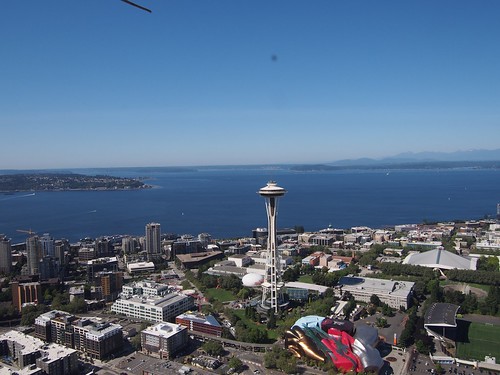 After splashdown, we took the streetcar to a place where we could eat lunch right by the monorail tracks. Then we rode the monorail again. Then we caught a train (it went underground a bit so it was a “subway” to them!) and rode it a few blocks.

There is even scenery underground, it seems. 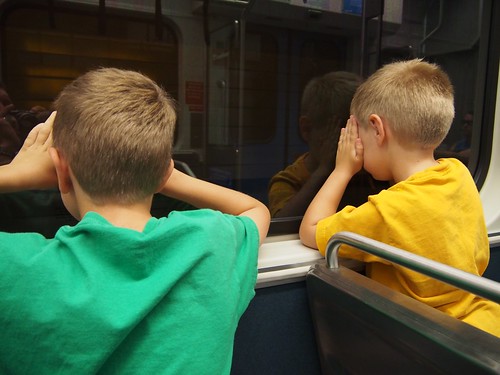 We rode a bus back, and saved one last adventure for the next day: a ferry to Bainbridge Island. 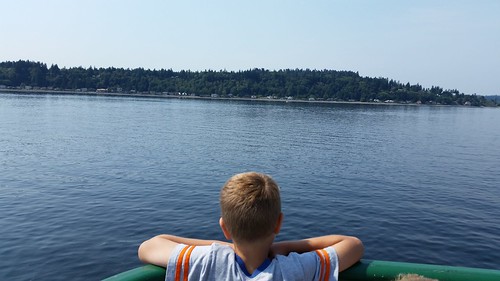 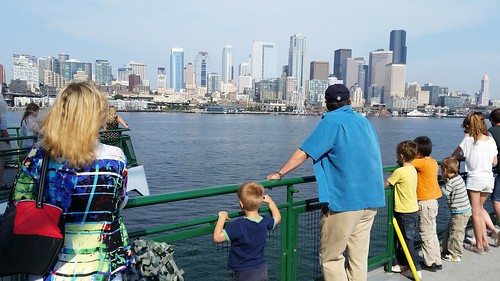 Laura and I even got some time to ourselves to go have lunch at an amazing Greek restaurant to celebrate a year since we got engaged. It’s amazing to think that, by now, it’s only a few months until our wedding anniversary too!

There are many special memories of the weekend I could mention — visiting with Laura’s family, watching the boys play with her uncle’s pipe organ (it’s in his house!), watching the boys play with their grandparents, having all six of us on the train for a day, flying paper airplanes off the balcony, enjoying the cool breeze on the ferry and the beautiful mountains behind the lake. One of my favorites is waking up to high-pitched “Meow? Meow meow meow! Wake up, brother!” sorts of sounds. There was so much cat-play on the trip, and it was cute to hear. I have the feeling we won’t hear things like that much more.

So many times on the trip I heard, “Oh dad, I am so excited!” I never get tired of hearing that. And, of course, I was excited, too.

3 thoughts on “2AM to Seattle”