Such were the cries a few first graders raised Monday. Laura and I had gone to school to eat lunch with Jacob — this was his last week of first grade. We stayed for recess after lunch, and Jacob and his friend told us to pretend to be a shark lurking underneath the bridges and things of the playground. I was told that “adults are too old to climb up here.” So Laura and I started chasing Jacob and his friend around the playground equipment. And, much to their delight, they were usually able to evade us. And, to their even greater delight, sometimes I could reach up and brush a shoe or leg.

Pretty soon Laura had enough of the game, but about then other kids started to notice what was going on. Shark-taunting began (“nana-booboo!”), and pretty soon half a dozen first-graders were running away from the shark! Eventually, it was time to go in, and it had been a great time.

Jacob had been proud to have Laura and me there to eat lunch with him. He got to be the first in his class to go to lunch, happily slipping into the tour guide role he loves. Sometimes he would tell us in exacting detail what would happen. Other times, I’d ask something like how will we know when lunch is over, and he’d get a sly smile and say, “You will see!”

The next day was Jacob’s last at school, and Oliver had also recently finished preschool. So Laura and I planned a “graduation party”. We came up with some ideas of things they might like to do, and let them choose. Thankfully they both agreed on a choice: water slide.

My parents gave them water slides one time, and we got one out, hooked it up to the hose, and let them have fun. And boy, did they ever! 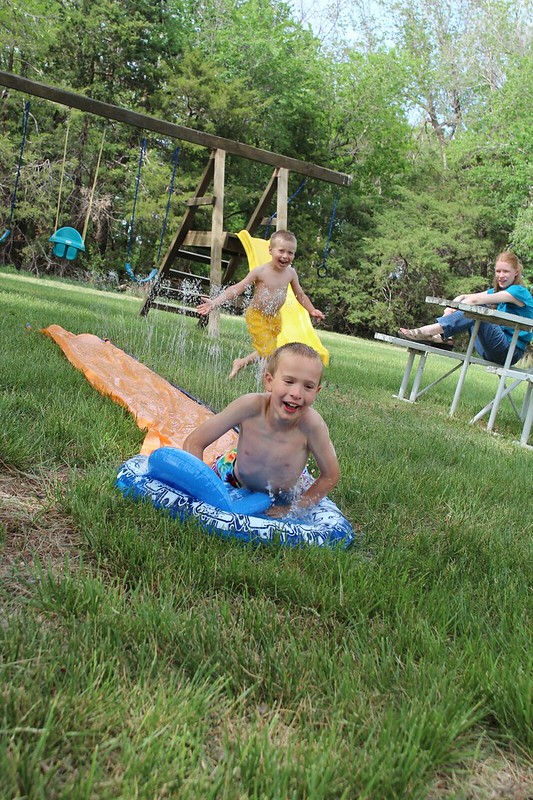 And after the better part of an hour running with delight on the water slide, they decided to turn another slide into a water slide. So I helped them rig up a hose on our slide, and they’d slide down it, and splash into a giant mud puddle at the bottom. Or, as the case may be, just stand in the mud, enjoying it. 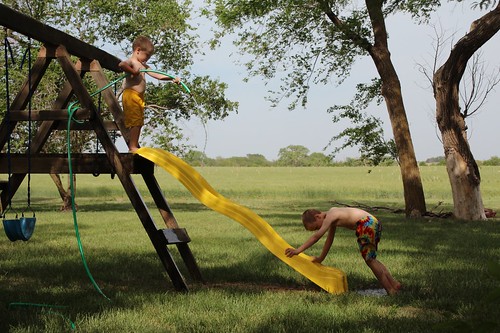 We then went out to eat at one of their favorite restaurants and even had time to play in a park.

Yes, a wonderful celebration. All four of us were wearing smiles that day.

It reminded me of Jacob’s school year, but also of the past year — it was about a year ago that Jacob and Oliver first had the chance to really meet Laura. I have many photos and stories from the past year that I’ll be sharing in the next little while. What an incredible year it has been!