Today in the USA is Martin Luther King, Jr., day. But sometimes these holidays get confusing for a 6-year-old.

When he realized that it was really MLK Day, he was disappointed. “That day isn’t green.” So I said, “Jacob, how about we celebrate pretend St. Patrick’s Day on Monday?” His face lit up, he got a huge smile, and said, “Oh yes! Great idea, dad!” Oliver got all excited about it too.

I was already planning on us doing some cooking, and thankfully had green food coloring already. So I sort of discarded my plans so each meal could have something green in it.

When the boys woke up this morning, I wished each of them “Happy Pretend St. Patrick’s Day!” We all wore green. Jacob put his shirt on backwards so the side with more green would be facing front.

For breakfast, our green dish was green crepes with a succotash (based on baby lima beans and corn) filling. The boys were excited to discover that the crepes could be green on one side, and green and a little brown on the other. Jacob was unsure of the succotash idea, but after having a few bites, declared it “excellent”.

After breakfast, we made bread. They loved watching the green food coloring disperse in the water. We checked on how green the dough looked periodically. We watched how it was rising and whether it was staying green. And we checked in on it backing, as the crust turned from green to brown. We discussed green bread over and over. Important questions were asked and answers were attempted.

And then, of course, the moment of truth – removing the loaf from the pan. 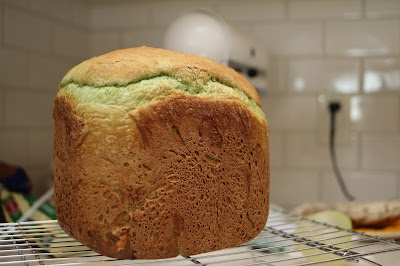 The boys jabbered excitedly that there was some green peeking out. While we waited for it to cool, we went out to the creek. The creek is dry this year, so we got to walk in it. Jacob used his stick to make a line behind him. I asked him, “Is that a line so we can find our way back?” “Oh! Uhm. Yes!” And then he added arrows so we’d know which way to go.

Jacob stopped every 20 or so feet to collect pretend train tickets from Oliver and me. Oliver eventually grew tired of this, so Jacob started collecting Oliver’s ticket from me. They climbed on some trees, managed to find some mud, drew outlines of train cars in the dirt, and then followed Jacob’s line back down the creek bed. They pointed out any green things they saw.

Then we went back to the house, took off our warm coats, and cut into the bread. 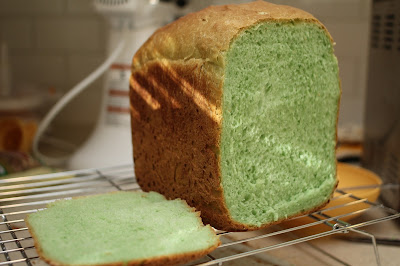 Can you imagine the excitement?

I hadn’t realized “green” is a flavor, but it must have been somehow, because those boys absolutely loved this green bread. When we got out the jam, Jacob realized that it was red on the green bread, and that now his bread was Christmas-colored.

All sorts of green bread discoveries were made, but the best among them was that if you hold a slice of green bread up to the bright sun, the sun makes it glow green and it looks like a stained-glass window.

Sometimes a few drops of food coloring can add a ton of excitement to a day. 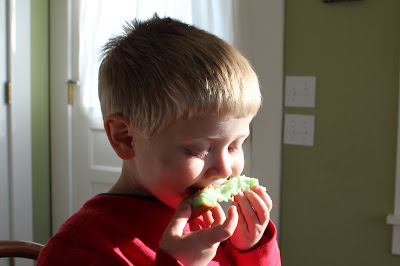