A couple of weeks ago, I walked in to a nice, sit-down restaurant, with a smile on my face. It’s the kind of restaurant with folded cloth napkins on the tables. “Table for three, please” – as Jacob and Oliver were with me.

This much isn’t unusual. I have periodically taken them out to eat for quite some time, and they enjoy it.

But there were a few unusual things about this particular day. I suppose the main one is that they had just been doing this. 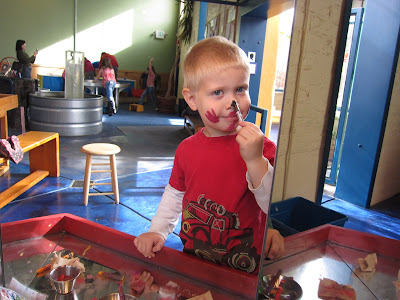 Yes, painting your own face can be a lot of fun. And also serious business. 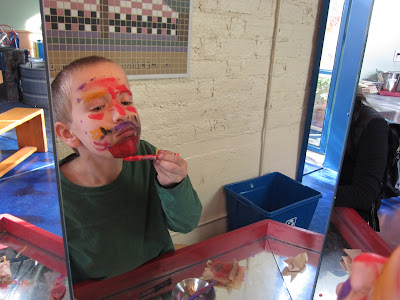 And one of the places we visited was the excellent Santa Fe Children’s Museum. It may be the best children’s museum I’ve ever seen. Not the largest, or the flashiest, but that’s part of the reason I say “best”. They had chimes (and many other percussive “instruments” to produce different pitches, including mounted hubcaps and varying length wooden planks). They had a great magnets table with washers and nuts, so children can build their own bridges, stairs, etc. using magnetism. A giant bubble table, tunnels to crawl in outside, etc. A great place.

And, apparently, the thing they were really known for — I did not know this in advance — is the paint your own face station. Jacob and Oliver really got into it. Oliver informed me he was a lion and I heard “ROAR! ROAR!” periodically all afternoon. Jacob asked me to help paint a J, and the spirals, on his cheeks. After some careful thought, he informed me that he was “spiral man”.

Next to the paint your own face area was a clean your own face area. Most kids were being helped to clean their own face by their parents on their way out. Jacob and Oliver protested that plan, so I figured, if they want to enjoy painted faces all day, why not?

And this, of course, led into lunch with self-painted faces. Nobody at the restaurant commented, but the owner had a huge grin when he saw them. (It was a Mediterranean place, and I’m sure the owner would have commented had there not been a language barrier.) Incidentally, the boys became quite the fans of souvlaki.

Later, as we walked around Santa Fe Plaza and another museum, they drew smiles all over the place. Several kind people asked them, “Did you enjoy the children’s museum?” Yes, everyone in Santa Fe seemed to know precisely where kids with painted faces had been that day.

Santa Fe is an amazing and beautiful city. It was warm and friendly, and the architecture and layout was fun to see – and pedestrian-friendly. We walked past the Cathedral Basilica of St. Francis of Assisi several times, and went in once. For some reason I could never fully explain, I could often smell their incense even a block or two away. It added to the crisp wintry feel of the plaza.

The point of the trip wasn’t Santa Fe, though. It was Jacob and Oliver on Amtrak, which is the thing they were really most excited about – of course. They were excited as usual, and despite the fact that the train comes through this area only at around 3AM, were plenty excited to be on the train. And, in fact, didn’t fall asleep again until about 5 due to the excitement (though they did an excellent job of being quiet). Of course, 6AM was “morning” so they were wide awake by then.

Jacob had been planning what he’d eat on the train for days already, and had announced he would be having French toast for breakfast and pizza at lunch. He was a bit disappointed to see that French toast wasn’t on the menu this time, but pancakes saved the day.

While waiting for the dining car to open at 6:30, we went to the lounge car for awhile. I had brought along various things for them to do on the train, of course, and among them was a notebook and some markers. Jacob loved drawing suns and stars, and sometimes writing short notes. He gave notes to several friendly people that happened to be visiting with us on the train. Oliver enjoyed it too, but he was more intrigued by the cheap set of multi-colored post-it notes.

There were two happy, and somewhat tired, boys getting off that train in the middle of the night when we returned.