This post is going to be more a photolog than a narrative, and I apologize in advance for it being a bit disjointed.

I’ve already touched on these themes a bit in the other post, but now it’s time to focus on them. Immediately after leaving the airport, it’s quite clear that things are a little different. Trees are square. People ride around in the backs of pickups — sometimes on top of piles of debris. Left turns are made in front of other lanes of traffic going the same way. But those are just the things obvious from the road. It’s a lot of fun to enjoy the differences. First, the ubiquitous square trees. 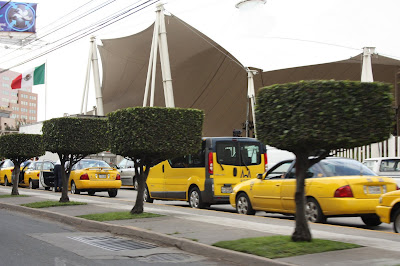 They look pretty, and are found all over. I also found carefully-manicured trees in cone shapes, more cylindrical shapes, etc. It seems that tree care is taken seriously in Mexico. It was also not uncommon to see the bottom few feet of a tree painted white. A park in Guanajuato had a whole bunch of trees carefully trimmed. 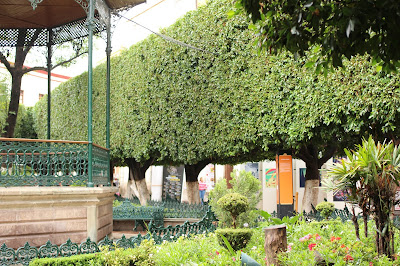 And from up on the mountain, it still looked impressive (the green area behind the dome). 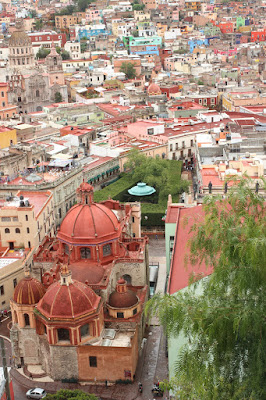 Driving in Mexico was interesting for a lot of reasons. The highways there aren’t quite as limited access as the freeways in the USA. It was quite common to see bicyclists, walkers, a mule, or some cattle ambling along the side of the road. Roadside taco stands don’t require taking an exit. You just pull off the road because it’s right there.

Some sights were a bit surprising. Cattle in a pickup, with rope, for instance. 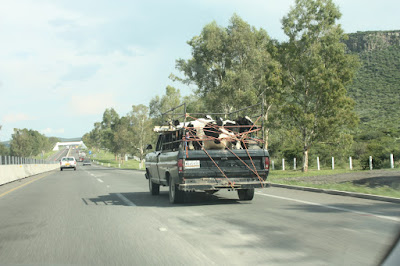 Or cattle crossing the highway on the overpass. 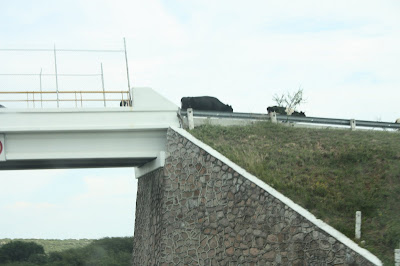 Street vendors were everywhere. Stop at a red light and someone might spring from the side of the road and suddenly start washing your windshield (expecting a tip); try to sell you flowers, juice, or bug zappers; or even throw business card-sized advertisements for adult websites into any open windows they can find. One night we saw an incredible fire juggler. I would have tipped him well but he was too far away to do so before the light turned green.

Mexico’s history stretches back into prehistoric times, and we saw the Teuchitlan ruins at Guachimontones one day. It was truly a remarkable feeling to be able to walk down the middle of the ancient ball court, or to climb up one pyramid and see the other from it. 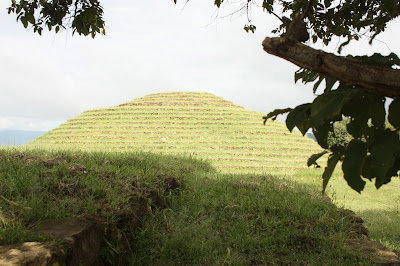 It’s not exactly architecture, but Jacob and Oliver sure enjoyed visiting the hot springs at Bosque de la Primavera. Jacob still remembers that “where the steam is, the water is 200 degrees, and we CAN’T TOUCH IT THERE!”

Back in Guadalajara, here’s a photo from the inside of the grand old cathedral. 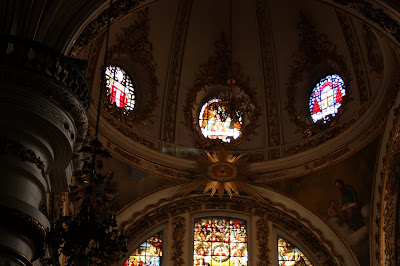 Compared to the cathedrals we saw in Europe, this was of a similar general size and design, and perhaps only slightly newer. But one big difference: worshipers outnumbered tourists at every Mexican cathedral I saw, whether in the center of Guadalajara or at a rainy intersection in Guanajuato or a plaza in Tlaquepaque. It made them feel more alive, and perhaps more sacred as well.

One surprise was seeing people sitting on the steps of the cathedral in downtown Guadalajara selling trinkets such as beads. I think the only other place I had seen something like that was in New Orleans.

All of Guadalajara’s Centro was beautiful. Much of it survives from colonial days; I think a person could spend days exploring its museums and buildings. Way too many of my 900 photos were taken in Centro to post on the blog, but just for flavor, here’s one of the less than historic scenes. 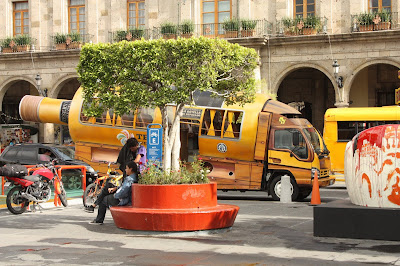 Yes, that is a bus shaped like a tequila bottle.

Fountains were beautiful and common across Mexico. A few of them were easily reachable by boys, and ours sure loved those. 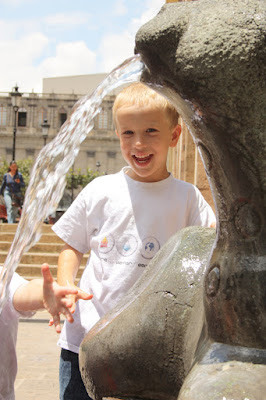 There was a lot of public art, including this interesting chair/skeleton/I’m not sure what it is: 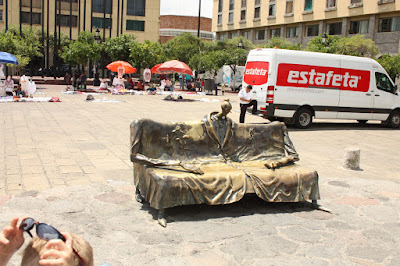 And, just for good measure while walking around Centro, they tossed in an apparent Redundant Array of Inexpensive Typewriters. 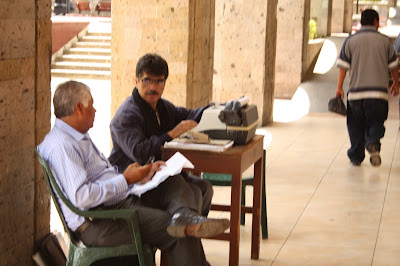 I don’t know what they were doing, but there were about a dozen guys sitting out in the sun typing on their manual typewriters on their identical tables.

And who can leave Guadalajara without seeing one of North America’s most impressive traffic circles. I’ve got to hand it to the Mexicans for making something that is normally really boring into an interesting work of art. 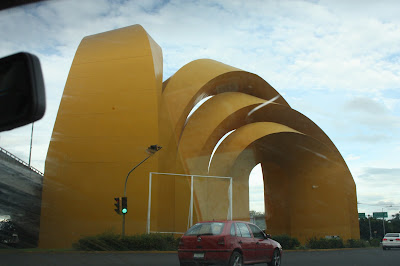 Over in Guanajuato, a lot of driving takes place in the city’s vast underground tunnel system. Here’s a scene emerging from one of them. 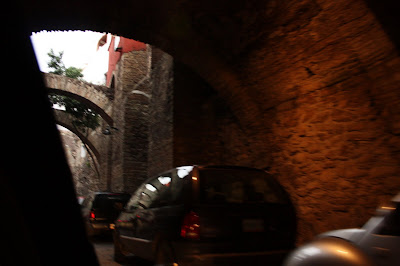 Guanajuato was already getting decorated for Mexican independence day festivities (Sept. 15-16) while we were there. 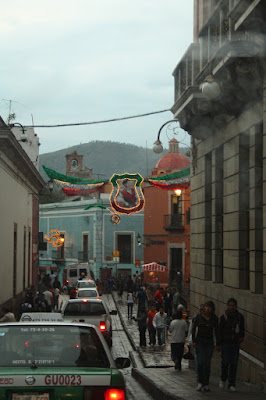 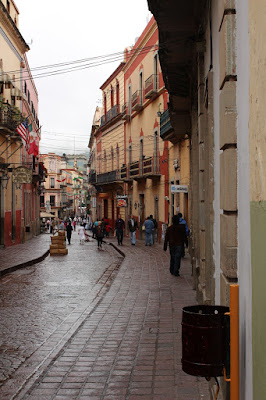 Many of the streets were closed to traffic — and perhaps not wide enough to handle vehicles anyway. Those streets had a wonderful peaceful and slow feel to them.

I feel that I’ve barely done the trip justice with this post. The feelings of walking down a beautiful Guanajuato street, or stepping into a Spanish cathedral, or even seeing a bunch of guys with typewriters, just can’t be replicated. It’s brimming with history and character, and shouldn’t be missed.